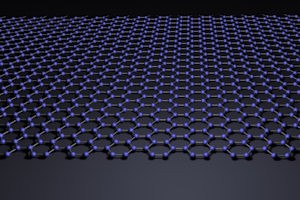 Faster and lighter aircraft could be built using an incredible super-thin material just one atom thick, according to new research conducted at The University of Manchester.

Writing in the journal Advanced Materials, a team of materials scientists and physicists say graphene has the potential to replace carbon fibres in high performance materials that are used to build aircraft.

Graphene – discovered in 2004 by physicists Prof Andre Geim and Dr Kostya Novoselov at The University of Manchester – is a two-dimensional layer of carbon atoms that resembles chicken wire.

As well as being an excellent conductor of electrons, with the potential to replace silicon, graphene is also one of the stiffest-known materials. A recent study found it to be the strongest material ever measured.

This led researchers to investigate its behaviour and properties when mixed with other materials.

A University of Manchester team, which included Dr Novoselov, put a single graphene sheet between two layers of polymer and used a technique called Raman spectroscopy to measure how the carbon bonds responded when the graphene was stretched.

Raman spectroscopy works by shining a laser light onto a molecule and then collecting and analysing the wavelength and intensity of the resulting scattered light.

The technique basically measures bond vibration between atoms. As researchers stretch the bond the vibration changes frequency. It can be compared to tuning a guitar string and hearing the pitch change.

Researchers were able to use Raman spectroscopy to look at the change of the vibrational energy of the bond and then worked out the change in bond length.  From this information they calculated the improvement in stiffness the graphene gave to the polymer composite.

Professor Robert Young of the School of Materials, said: “We have found the theories developed for large materials still hold even when a material is just one atom thick.”

“We can now start to use the decades of research into traditional carbon fibre composites to design the next generation of graphene-based materials.”

Dr Ian Kinloch, a researcher in the School of Materials, commented: “This relatively new material continues to amaze, and its incredible properties could be used to make structural, lightweight components for fuel efficient vehicles and aircraft.”

For more information please contact The University of Manchester Press Office on 0161 275 8258.

Prof. Young and Dr Kinloch are available for comment by arrangement.

Images of graphene are available from: http://onnes.ph.man.ac.uk/nano/Images/

The research was supported by the Engineering and Physical Sciences Research Council (EPSRC) and the Royal Society.

The paper, ‘Interfacial Stress Transfer in a Graphene Monolayer Nanocomposite’ by L. Gong, I. A. Kinloch, R. J. Young, I. Riaz, R. Jalil and K. S. Novoselov, is available on request.