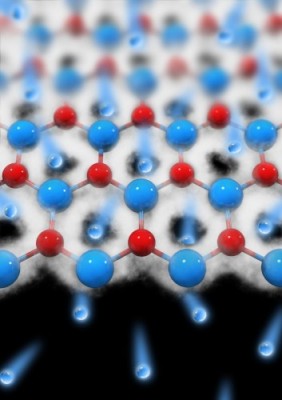 One of the hydrogen isotopes, deuterium, is widely used in analytical and chemical tracing technologies and, also, as heavy water required in thousands of tons for operation of nuclear power stations.

The heaviest isotope, tritium, is radioactive and needs to be safely removed as a byproduct of electricity generation at nuclear fission plants. Future nuclear technology is based on fusion of the two heavy isotopes.

The current separation technologies for production of heavy water are extremely energy intensive, and have presented a major scientific and industrial problem. Now graphene promises do so efficiently.

Researchers tested whether deuterons – nuclei of deuterium – can pass through graphene and its sister material boron nitride. They fully expected deuterons to easily pass through, as existing theory did not predict any difference in permeation for both isotopes.

The researchers were surprised to find that deuterons were not only effectively sieved out by their one atom thick membranes, but were sieved with a high separation efficiency.

The discovery makes monolayers of graphene and boron nitride attractive as separation membranes to enrich mixtures of deuterium and tritium.

Furthermore, the researchers showed that the separation is fully scalable. Using chemical-vapor-deposited (CVD) graphene, they built centimetre-sized devices to effectively pump out hydrogen from a mixture of deuterium and hydrogen.

We hope to see applications of these filters not only in analytical and chemical tracing technologies but also in helping to clean nuclear waste from radioactive tritium.

Dr Marcelo Lozada-Hidalgo, University of Manchester postdoctoral researcher and first author of the paper, said: “This is really the first membrane shown to distinguish between subatomic particles, all at room temperature.

“Now that we showed that it is a fully scalable technology, we hope it will quickly find its way to real applications.”

Professor Irina Grigorieva, who co-authored the research, said: “We were stunned to see that a membrane can be used to separate subatomic particles.

“It is a really simple set up. We hope to see applications of these filters not only in analytical and chemical tracing technologies but also in helping to clean nuclear waste from radioactive tritium”.