Graphene tunes in to new frequency 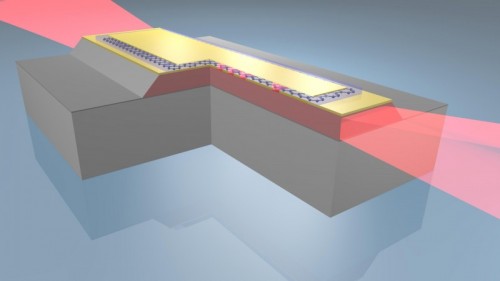 The fascinating electrical properties of graphene have allowed University of Manchester researchers to open up a new area of technology using terahertz lasers.

Terahertz technology exists on the electromagnetic spectrum between microwave and infrared frequencies. The benefit of using terahertz lasers instead of X-rays is that they can accurately scan materials without causing damage.

Highly-sensitive scanners for sensing minute defects in manufactured drugs, or detecting concealed weapons at airports could become more accurate and much safer for frequent use using the new technology.

Terahertz lasers are similar to X-rays in that they are invisible to the naked eye but are far safer in comparison by being non-destructive and non-invasive.

The team of researchers, led by Dr Subhasish Chakraborty and Sir Kostya Novoselov, reported in journal Science, that graphene could be used to control the frequency of terahertz lasers.

Dr Chakraborty said: “Terahertz technologies have been somewhat ignored by industry, partly due to the complexity of creating high-power tunable devices, as lots of different materials were necessary.

“Graphene can now fill in the gaps of this technology by creating a platform to electronically control devices and flexibly engineer device output”.

This new alternative method of scanning materials could dramatically improve the efficiency and accuracy of analysing materials in the pharmaceutical, security and agricultural industries.

Sir Kostya said: “Current terahertz devices do not allow for tuneable properties, a new device would have to be made each time requirements changed, making them unattractive on an industrial scale.

“Graphene however, can allow for terahertz devices to be switched on and off, as well as altering their state.”

The introduction of tuneable properties thanks to graphene could also potentially increase internet bandwidth capabilities up to and beyond one terabyte per second, a vast improvement on current internet speeds.

Graphene is the world’s first two-dimensional material. First isolated at The University of Manchester its unique material properties allow for improvements in existing technologies as well as allowing scientists to explore ideas which were previously limited to theory.

#Graphene tunes in to new frequency