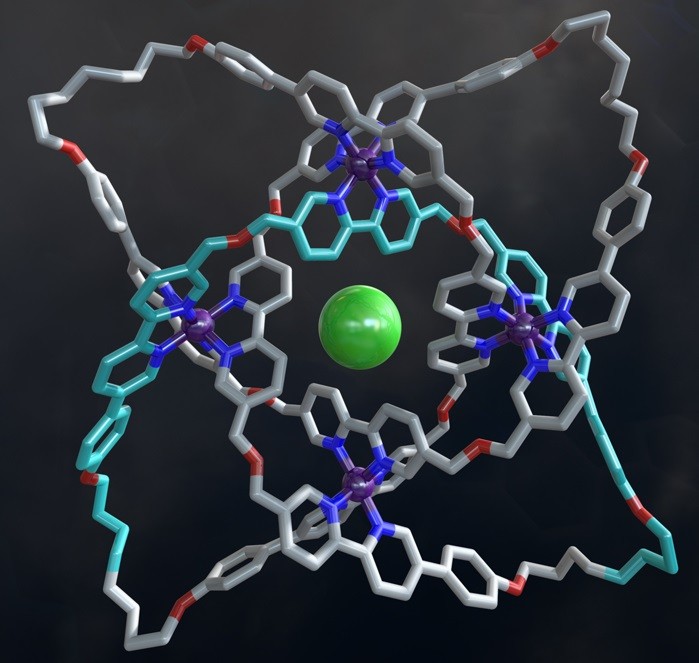 Structure of the molecular knot with eight crossings
The X-ray crystal structure of a 192-atom-loop molecular 819 knot featuring iron ions (shown in purple), oxygen atoms (red), nitrogen atoms (dark blue), carbon atoms (shown in metallic grey, with one of the building blocks shown in light blue) and a single chloride ion (green) at the centre of the structure.

Scientists at The University of Manchester are celebrating after becoming ‘record breakers’ and officially being awarded a Guinness World Record for tying the tightest knot ever produced.

The record was given to researchers at Manchester’s School of Chemistry, led by Professor David Leigh, for developing a way of braiding multiple molecular strands enabling tighter and more complex knots to be made than ever before.

The research breakthrough was originally published in the prestigious journal Science in January this year. It isn’t the only accolade the research has won, this month (December) it was also named on the prestigious 'Molecules of the Year' list by the American Chemical Society in Chemistry and Engineering News.

Professor Leigh said: “I grew up watching Roy Castle and the McWhirter twins (the co-founder of The Guinness Book of Records) on the TV programme, ‘Record Breakers’, so I know that nine year old me would be particularly proud. It’s been 45 years since then, but dedication is what you need if you want to be a record breaker.”

Professor Leigh added that he and his team were delighted to have achieved this scientific landmark. Producing the most tightly knotted physical structure ever known is a significant as it has the potential to create a new generation of advanced materials.

I grew up watching Roy Castle and the McWhirter twins (the co-founder of The Guinness Book of Records) on the TV programme, ‘Record Breakers’, so I know that nine year old me would be particularly proud. It’s been 45 years since then, but dedication is what you need if you want to be a record breaker.

The breakthrough knot has eight crossings in a 192-atom closed loop – which is about 20 nanometres long (ie 20 millionths of a millimeter).

Being able to make different types of molecular knots means scientists should be able to probe how knotting affects strength and elasticity of materials which will enable them to weave polymer strands to generate new types of materials.

At the time of the original publication, Professor Leigh said: ‘Tying knots is a similar process to weaving so the techniques being developed to tie knots in molecules should also be applicable to the weaving of molecular strands.

“For example, bullet-proof vests and body armour are made of kevlar, a plastic that consists of rigid molecular rods aligned in a parallel structure - however, interweaving polymer strands have the potential to create much tougher, lighter and more flexible materials in the same way that weaving threads does in our everyday world.

“Some polymers, such as spider silk, can be twice as strong as steel so braiding polymer strands may lead to new generations of light, super-strong and flexible materials for fabrication and construction.”

The research breakthrough was published in the prestigious journal Science on 13 January 2017 in a paper entitled: ‘Braiding a molecular knot with eight crossings’ DOI: 10.1126/science.aal1619

Scientists from the School of Chemistry have launched a new project called CAMERA - Chemistry at Manchester Explains Research Advances - which is a series of films on YouTube.