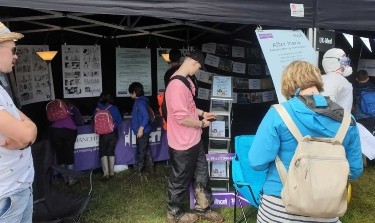 HCRI colleagues participated over the weekend in Bluedot 2019, the annual music, science and culture festival at Jodrell Bank.

HCRI’s stall provided a multimedia graphic novella experience and colouring station based on After Maria: Everyday Recovery from Disaster.

The graphic novella explores how Puerto Rican families were affected immediately after Hurricane Maria hit the island in 2017.

Although the novella tells the story of a fictional family, it is based on the experiences that tie together all of the families Dr Gemma Sou spoke to during her yearlong ethnographic research.

HCRI’s presence at Bluedot thus served to highlight to visitors that climate change was to blame for Hurricane Maria's extreme rainfall.

Awareness is crucial given low-income countries are the hardest hit by climate change-induced disasters.

New research by the American Geophysical Union (2019) analysed Puerto Rico's hurricane history and found that 2017's Maria had the highest average rainfall of the 129 storms to have struck the island during the past 60 years.

It also found that a storm of Maria's magnitude is nearly five times more likely to form now than during the 1950s, and linked this increase to the effects of anthropogenic climate change warming.

Climate change-induced disasters, however, tend to be underreported.

CARE International (2019) after an analysis of more than 1 million online news stories showed climate change-induced crises to be the most underreported humanitarian disasters of 2018.

The official death toll was 2,975, making Maria one of the deadliest natural disasters in U.S. history. Federal Emergency Management Agency (FEMA) released a report stating that the agency was.

Evidence from the Intergovernmental Panel on Climate Change indicates that the frequency, duration, and intensity of extreme climatic events affecting populations are on the rise.

From this perspective, HCRI’s participation at Bluedot raised awareness of this risk, to the many stall visitors they welcomed.