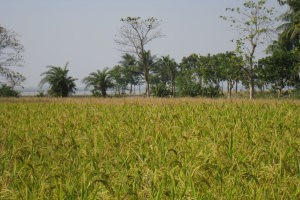 High levels of arsenic in rice have been shown to be associated with elevated genetic damage in humans, a new study has found.

Over the last few years, researchers have reported high concentrations of arsenic in several rice-growing regions around the world.

Now, University of Manchester scientists, working in collaboration with scientists at CSIR-Indian Institute of Chemical Biology in Kolkata, have proven a link between rice containing high levels of arsenic and chromosomal damage, as measured by micronuclei* in urothelial cells, in humans consuming rice as a staple.

The researchers discovered that people in rural West Bengal eating rice as a staple with greater than 0.2 mg/kg arsenic showed higher frequencies of micronuclei than those consuming rice with less than this concentration of arsenic.

The study, published in Nature Publishing Group’s Scientific Reports, looked at the frequency of ‘micronuclei’ – a tell-tale sign of chromosomal damage  (that has been shown by others previously to be linked to cancer) – by screening more than 400,000 individual cells extracted from urine samples from volunteers.

The team, funded by the UK India Education and Research Initiative (UKIERI), chose a study population with relatively similar dietary and socio-economic status that was not otherwise exposed to arsenic, for example, through drinking water.

They demonstrated that the trend of greater genetic damage with increasing arsenic in rice was observed for both men and women, for tobacco-users and non-users, and for those from three different locations within the study area. The pattern observed was broadly similar to that previously seen for people exposed to arsenic through drinking high arsenic well waters, which has caused devastating health impacts, including cancers, in many parts of the world.

The authors say their work raises considerable concerns about health impacts of consuming high arsenic rice as a staple, particularly by people with relatively poor nutritional status – perhaps as many as a few hundred million people. How directly relevant the results are to people in the UK, with a generally lower consumption of rice and better nutritional status, remains to be fully determined but is an obvious focus for further research.

Professor David Polya, who led the Manchester team in the University’s School of Earth, Atmospheric and Environmental Sciences, said: “Although concerns about arsenic in rice have been raised for some time now, to our knowledge, this is the first time a link between consumption of arsenic-bearing rice and genetic damage has been demonstrated. As such, it vindicates increasing concerns expressed by the European Food Safety Authority and others about the adequacy of regulation of arsenic in rice.

“In the absence of contamination, rice is an easily stored food that provides essential energy, vitamins and fibre to billions of people around the world, but a small proportion of rice contains arsenic at concentrations at which we have observed significant genetic damage in people who consume it as a staple food. We hope that our work will encourage efforts to introduce regulatory standards for arsenic in food, and particularly in rice, which are more consistent and protective of human health.”

Dr Ashok K Giri, who led the Indian research team, added: “Although high arsenic in rice is a potential threat to human health, there should not be any panic about the consequences, particularly as the health risks arise from long-term chronic exposure. We can avoid high arsenic rice by taking proper mitigation strategies for rice cultivation; moreover, one CSIR institute in India has already identified a number of Indian rice varieties which accumulate lower concentrations of arsenic, so we can easily address future human health risks with proper mitigation strategies Results of this study will not only help to understand the toxic effects caused by this human carcinogen but also these results will help the scientists and regulatory authorities to design further extensive research to set improved regulatory values for arsenic in rice, particularly for those billions of people who consume 10 to 50% rice in their daily diet.”

* Most human cells have one nucleus which contains 46 human chromosomes but when any of these chromosomes are damaged, the part of the chromosome not able to participate in cell division typically remains as small ‘micronuclei’ in any daughter cells. Increased frequency of these micronuclei has been shown by other groups to be linked to the development of cancers.

Professor Polya and his team in Manchester’s Williamson Research Centre for Molecular Environmental Science worked with a team led by Dr Giri, from India’s CSIR-Indian Institute for Chemical Biology, on the joint UK-India UKIERI British Council-funded research project.  The Manchester research team delivered the chemical analysis side of the work through the Manchester Analytical Geochemistry Unit, while the Kolkata-based CSIR-IICB team, funded by CSIR-IICB Network Project (NWP- 0052), undertook the sample collection and analysis of chromosomal damage.

The UK India Education and Research Initiative (UKIERI) is being implemented with the aim to bring forth a unique initiative that strengthens the bilateral relationship between India and the UK and set an example of best practice in international cooperation. UKIERI is a multi-stakeholder partnership programme supported and funded by Department for Business, Innovation and Skills, Indian Ministry of Human Resource Development, Foreign and Commonwealth Office, British Council, Department for Employment and Learning, Scottish Government, Welsh Government, Indian Department for Science and Technology and University Grants Commission. (http://www.ukieri.org/)

To arrange an interview with Professor David Polya contact the press office.