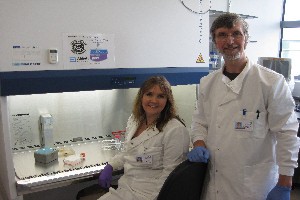 A widely used HIV drug could be used to prevent cervical cancer caused by infection with the human papilloma virus (HPV), say scientists.

University of Manchester researchers, working with colleagues in Canada, have discovered how the antiviral drug lopinavir attacks HPV by switching on a natural viral defence system in infected cells.

The study, published in the journal Antiviral Therapy, builds on the team’s previous work in 2006 that first identified lopinavir as a potential therapeutic for HPV-related cervical cancer following laboratory tests on cell cultures.

“This is a very significant finding as these cells are not cancer cells but are the closest thing to being like the cells found in a pre-cancerous HPV infection of the cervix. In addition we were also able to show that lopinavir kills these HPV-infected cells by re-activating a well-known antiviral system that is suppressed by HPV.”

In many developing countries, HPV-related cervical cancer is still one of the most common women’s cancers accounting for approximately 290,000 deaths per year worldwide. The same virus also causes a significant proportion of cancers of the mouth and throat in both men and women and this disease is showing an alarming increase in developed countries, such as the UK, where it is now more than twice as common as cervical cancer.

Although in the developed world vaccination programmes against HPV are well underway, these are not effective in women already infected with HPV. Furthermore, the current vaccines do not protect against all types of HPV and they are expensive, which will limit their use in countries with limited resources. A cheap and preferably self-administered treatment that could eliminate early-stage HPV infections before these have developed into cancers would therefore have distinct health advantages.

Dr Hampson said: “Our results suggest that for this drug to work against HPV it would be necessary to treat virus-infected cells of the cervix with roughly 10-15 times the concentration that is normally found in HIV-infected patients taking lopinavir as tablets. This implies that, for this treatment to work, it would need to be locally applied as a cream or pessary.”

Co-author on the paper, Dr Lynne Hampson, added: “These results are very exciting since they show that the drug not only preferentially kills HPV-infected non-cancerous cells by re-activating known antiviral defence systems, it is also much less toxic to normal non-HPV infected cells.

“Lopinavir is obviously safe for people to take as tablets or liquid but our latest findings provide very strong evidence to support a clinical trial using topical application of this drug to treat HPV infections of the cervix.”

The research in Manchester was carried out by the Hampsons’ PhD student, Gavin Batman, who was funded by the Humane Research Trust charity, with additional funding supplied by the Caring Cancer Trust and the Cancer Prevention Research Trust.

A copy of the paper, ‘The HIV protease inhibitor lopinavir up-regulates expression of the antiviral protein ribonuclease L in HPV positive cervical carcinoma cells,’ is available on request.