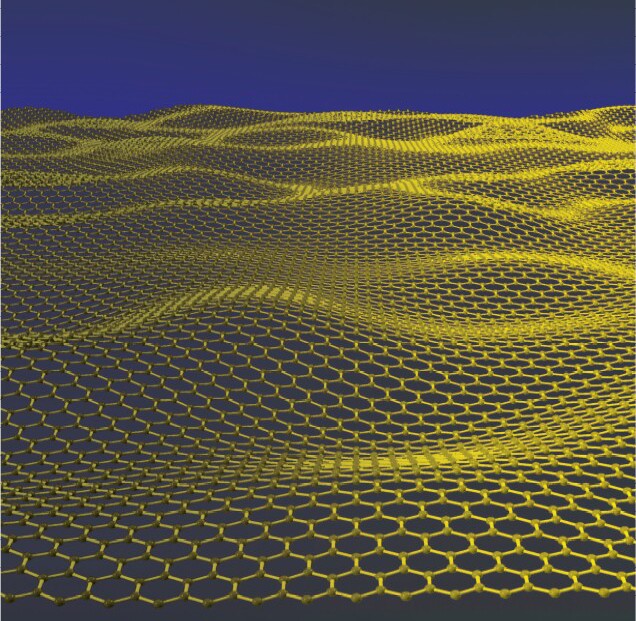 New experiments by researchers at The University of Manchester have placed the best limits yet on impermeability of graphene and other two-dimensional materials to gases and liquids. The work has also revealed that the carbon sheet can act as a powerful catalyst for hydrogen splitting, a finding that promises cheap and abundant catalysts in the future.

Graphene theoretically boasts a very high energy for the penetration of atoms and molecule, which prevents any gases and liquids from passing through it at room temperature. Indeed, it is estimated that it would take longer than the lifetime of the Universe to find an atom energetic enough to pierce a defect-free monolayer graphene of any realistic size under ambient conditions, say the researchers led by Professor Sir Andre Geim. This hypothesis is supported by real-world experiments performed over a decade ago which found that one-atom-thick graphene was less permeable to helium atoms than a quartz film of a few microns in thickness. Although the film is 100,000 thicker than graphene, this is still very far from the theoretical limit.

The Manchester team developed a measurement technique that is many billion times more sensitive to permeating gas atoms than any of the known methods. In their study, reported in Nature, they began by drilling micron-sized wells in monocrystals of graphite or boron nitride, which they covered with a one-atom-thick graphene membrane. Since the top surface of these containers is atomically flat, the cover provides a perfect air-tight seal. The only way that atoms and molecules can enter a container is through the graphene membrane. The membrane itself is flexible and responds to minor changes in pressure inside the container.

The researchers then placed the containers in helium gas. If atoms enter or exit a container, the gas pressure inside increases or decreases, respectively, and makes the surface of the cover bulge over some small distances. The team monitored these movements with angstrom precision using an atomic force microscope.

The new result backs up (and provides an explanation for) some of the previous reports in the literature on graphene’s unexpectedly high catalytic activity, which was particularly counterintuitive because of the extreme inertness of its bulk parent, graphite.

From changes in the membrane position, the number of atoms or molecules penetrating through graphene can be calculated precisely. The researchers found that no more than a few helium atoms - if any - entered or exited their container per hour. “This sensitivity is more than eight to nine orders of magnitude higher than achieved in previous experiments on graphene impermeability, which themselves were a few orders of magnitude more sensitive than the detection limit of modern helium leak detectors. To put this into perspective, one-atom-thick carbon is less permeable to gases than a one-kilometre-thick wall of glass”, explains Geim.

Helium is the most permeating of all gases, because of its small weakly interacting atoms. Nonetheless, the researchers decided to repeat their experiments with other gases such as neon, nitrogen, oxygen, argon, krypton, xenon and hydrogen. All of them showed no permeation with the same accuracy as achieved for helium, except for hydrogen. In contrast to all the others, it permeated relatively rapidly through defect-free graphene. Dr Pengzhan Sun, the first author of the Nature paper, commented “This is a shocking result: A hydrogen molecule is much larger than a helium atom. If the latter cannot pass through, how on earth larger molecules can”.

The team attributes the unexpected hydrogen permeation to the fact that graphene membranes are not completely flat but have a lot of nanometre-sized ripples. Those act as catalytically active regions and dissociate absorbed molecular hydrogen into two hydrogen atoms, a reaction that is usually hugely unfavourable. Graphene ripples favour the hydrogen splitting, in agreement with theory. Then, the adsorbed hydrogen atoms can flip to the other side of the graphene membranes with a relative ease, similarly to permeation of protons through defect-free graphene. The latter process was known before and explained by the fact that protons are subatomic particles, small enough to squeeze through the dense crystal lattice of graphene.

“The new result backs up (and provides an explanation for) some of the previous reports in the literature on graphene’s unexpectedly high catalytic activity, which was particularly counterintuitive because of the extreme inertness of its bulk parent, graphite,” says Geim.

“Our work provides a basis for understanding why graphene can work as a catalyst -- something that should stimulate further research on using the material in such applications in the future,” Dr Sun adds. “In a sense, graphene nanoripples behave like platinum particles, which are also known to split molecular hydrogen. But no one expected this from seemingly inert graphene”.