How the Industrial Revolution is part of Manchester’s new revolution 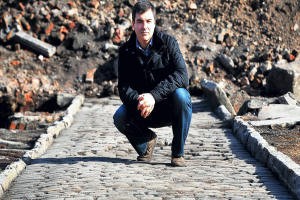 A fascinating glimpse of Industrial Revolution life, including the remains of a club frequented by Friedrich Engels, has been revealed at the site of the National Graphene Institute.

Cellars from rows of 1830s terraced houses and the remnants of the Albert Club have been unearthed by archaeologists beginning work at the new £61m Institute at The University of Manchester – the home of graphene.

The buried remains provide a window into life in Manchester almost 200 years ago and show how graphene, Manchester’s new revolution, will be built on the foundations set by the Industrial Revolution.

The club was founded for Manchester’s community of middle class Germans involved in the cotton trade, and Engels became a member in 1842. It was while living in Manchester that experienced the horrific conditions people worked in, which inspired his book The Condition of the Working Class in England.

Fronted by formal gardens and previously owned by architect Jeptha Pacey as his private villa, the club was converted into a private social club named after Queen Victoria’s consort.

With the remodelling that the building has undergoing during the later nineteenth and twentieth centuries, very little survives that can be identified firmly with the Albert Club. However, several fragments of ornate stone columns are likely to derive from the use of the building as a Turkish baths.

The cellars of five properties along the former Lawson Street have been discovered, together with the rear yards of larger houses that fronted onto Booth Street East. The fabric of the cellars retain interesting evidence for how they were used, and how they were adapted during the later nineteenth century to comply with legislation that was introduced during the 1880s and 1890s.

An intact sink has been removed from the site and Nobel Laureate Professor Kostya Novoselov intends to include it in the Institute when it opens in 2015.

The site covers where Lawson Street used to run – the old cobbled street has also been unearthed – and the former houses on Ebenezer Plat Terraces.

The stunning, glass-fronted National Graphene Institute (NGI) will be the UK’s home of research into the world’s thinnest, strongest and most conductive material, providing the opportunity for researchers and industry to work together on a huge variety of potential applications.

It is hoped the centre will initially create around 100 jobs, with the long-term expectation of many thousands more in the North West and more widely in the UK.

The 7,600 square metre building will house state-of-the-art facilities, including two ‘cleanrooms’ – one which will take up the whole of the lower ground floor – where scientists can carry out experiments and research without contamination.

Funding for the NGI will come from £38m of Government funds via the Engineering and Physical Sciences Research Council, as part of £50m allocated for graphene research, and the University has applied for £23m from the European Research and Development Fund (ERDF). The NGI will operate as a ‘hub and spoke’ model, working with other UK institutions involved in graphene research.

Professor Novoselov said: “it was an unexpected and pleasant surprise to find these fascinating remains at the site of the Institute.

“We have been very careful to record these remnants of the Industrial Revolution and we will look to keep some artefacts for use in the new building or elsewhere.

“It is genuinely exciting to start work on such a significant research institute on such an important site.”

University of Manchester Director of Estates Diana Hampson said: “We have been advised that the remains we have uncovered are not hugely significant in archaeological terms, but are fascinating nonetheless.”

An open day is taking place on Friday March 1st from 10am-3pm. The site is on Booth Street East, opposite the Aquatics Centre car park.

Members of the press are invited to a photocall at the site from 11am-12pm on Thursday February 28th. Professor Novoselov and architects Oxford Archaeology North will be available for photos/filming and for brief interviews.

Please contact the Press Office to confirm your attendance.

Artist impressions of the National Graphene institute are available from the Press Office.

More information about graphene can be found at www.graphene.manchester.ac.uk