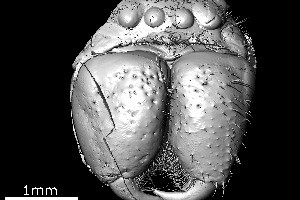 Scientists have used the latest computer-imaging technology to produce stunning three-dimensional pictures of a 49 million-year-old spider trapped inside an opaque piece of fossilized amber resin.

University of Manchester researchers, working with colleagues in Germany, created the intricate images using X-ray computed tomography to study the remarkable spider, which can barely be seen under the microscope in the old and darkened amber.

Writing in the international journal Naturwissenschaften, the scientists showed that the amber fossil – housed in the Berlin Natural History Museum – is a member of a living genus of the Huntsman spiders (Sparassidae), a group of often large, active, free-living spiders that are hardly ever trapped in amber.

As well as documenting the oldest ever huntsman spider, especially through a short film revealing astounding details, the scientists showed that even specimens in historical pieces of amber, which at first look very bad, can yield vital data when studied by computed tomography.

“More than 1,000 species of fossil spider have been described, many of them from amber,” said Dr David Penney, from Manchester’s Faculty of Life Sciences. “The best-known source is Baltic amber which is about 49 million years old, and which has been actively studied for over 150 years.

“Indeed, some of the first fossil spiders to be described back in 1854 were from the historically significant collection of Georg Karl Berendt, which is held in the Berlin Natural History museum. A problem here is that these old, historical amber pieces have reacted with oxygen over time and are now often dark or cracked, making it hard to see the animal specimens inside.”

Berendt’s amber specimens were supposed to include the oldest example of a so-called Huntsman spider but this seemed strange as huntsman spiders are strong, quick animals that would be unlikely to be trapped in tree resin. To test this, an international team of experts in the fields of fossils and living spiders, and in modern techniques of computer analysis decided to re-study Georg Berendt’s original specimen and determine once and for all what it really was.

“The results were surprising,” said Dr Penney. “Computed tomography produced 3D images and movies of astounding quality, which allowed us to compare the finest details of the amber fossil with similar-looking living spiders.

“We were able to show that the fossil is unquestionably a Huntsman spider and belongs to a genus called Eusparassus, which lives in the tropics and also arid regions of southern Europe today, but evidently lived in central Europe 50 million years ago.

“The research is particularly exciting because our results show that this method works and that other scientifically important specimens in historical pieces of darkened amber can be investigated and compared to their living relatives in the same way.”

Professor Philip Withers, who established the Henry Moseley X-ray Imaging Facility – a unique suite of 3D X-ray imagers covering scales from a metre to 50nm – within Manchester’s School of Materials, added: “Normally such fossils are really hard to detect because the contrast against the amber is low but with phase contrast imaging the spiders really jump out at you in 3D. Usually you have to go to a synchrotron X-ray facility to get good phase contrast, but we can get excellent phase contrast in the lab. This is really exciting because it opens up the embedded fossil archive not just in ambers.”

Picture 1: Eusprassus crassipes, a fossil huntsman spider in almost 50 million-year-old Baltic amber, as it appears under the microscope.

Picture 2: The same specimen, as revealed by modern techniques of X-ray computed tomography.

The 3D images were obtained on an Xradia microCT 160kV imager.

Additional hi-res images (tiff) and three versions of the video (mpg mp4 wmv) are available to download at http://db.tt/GceCAtE