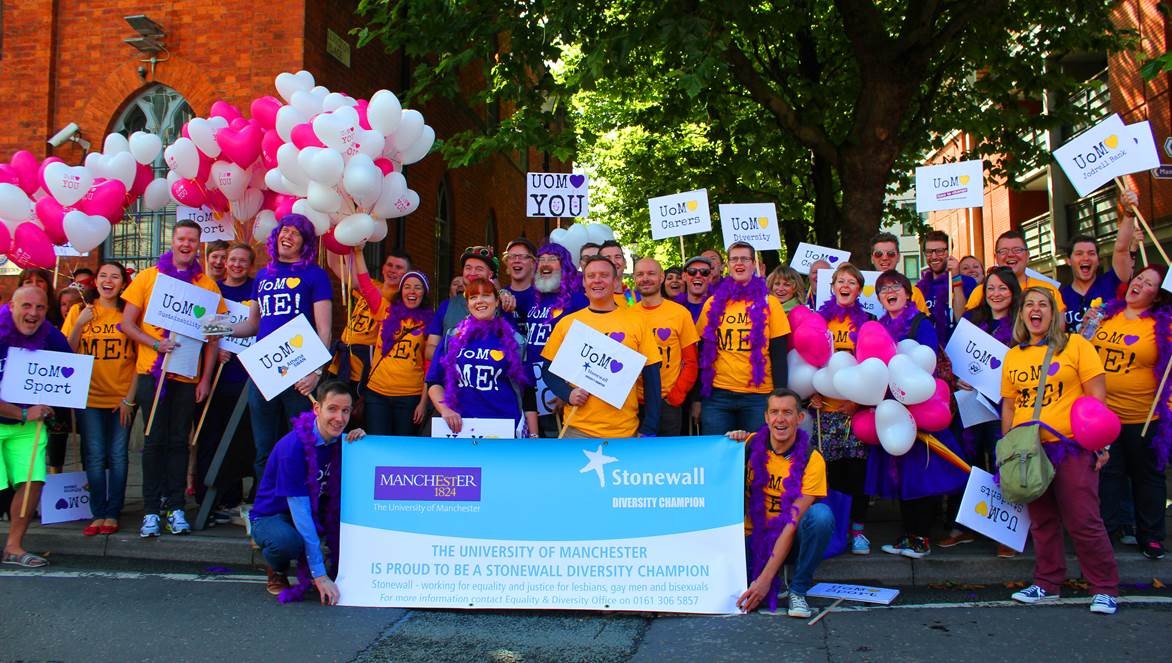 The University of Manchester is one of the top employers in the country for lesbian, gay, bi and trans staff according to the newly released Stonewall Workplace Equality Index, Top 100 Employers list.

This year the University has moved up 12 places to 41st in the country in the independent table, ranking it among the best universities and overall one of the best employers. It is now also in the top five universities.

Additionally this year, the University’s Lesbian, Gay Bisexual, Transgender Staff Network Group (ALLOUT) is among those which have been specially selected as a Highly Commended Network Group, after scoring more than 90 percent in this category of the Index.

Each year, Stonewall - a charity which campaigns for the equality of lesbian, gay, bisexual and trans people across Britain - compiles its Top 100 Employers list based on its Workplace Equality Index. The Index takes into account factors such as career development, policies in place and support for staff. It also invites feedback from staff, with over 90,000 people answering a questionnaire this time around.

Director of Human Resources, Karen Heaton, said: “Manchester has done consistently well in the Index, and this year we have been able to improve our position yet again. The result shows that the University is a welcoming place for staff members of all backgrounds and this is something we can all be justifiably proud of.”

Part of the recognition for Manchester is for its staff network, ALLOUT. This group, which has 172 members, is at the forefront of providing support and influencing policy. It also runs numerous activities such as raising money for charity, running events in the local community and representing the University at Manchester Pride.

Paul Marks-Jones, the University’s Equality, Diversity & Inclusion Adviser, who is responsible for compiling the University’s entry and working with the staff network said: “The efforts of ALLOUT are a major reason why the University performs so well in this Index. They don’t just make a difference inside the University though, the events they organise, the charities they support, plus collaborations with other organisations, takes this message far beyond the University campus.”

The Index is free to take part in and more than 430 employers submitted entries in 2017, across the public, private and third sectors. This year’s 41st place represents the highest position the University has achieved since it first took part in the Workplace Equality Index in 2012, despite an ever-increasing number of participants.

Duncan Bradshaw, Director of Membership Programmes, Stonewall said: “The University of Manchester and all those who have made this year’s Top 100 Employers list have done a fantastic job, and really do put equality and inclusion at the forefront of their work.

“We were thrilled to have 439 submissions for this year’s Index, one of the most competitive yet, and I would like to thank each and every organisation that took part. With your continued efforts and hard work, we will continue to work toward a world where all lesbian, gay, bi and trans staff are welcomed and accepted without exception in their workplaces.”