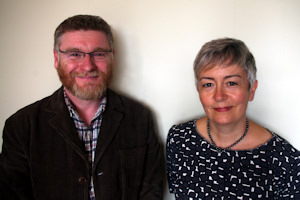 Two Directors at the University of Manchester’s Jodrell Bank Observatory have been honoured for their innovative approach to public engagement with physics.

Dr Teresa Anderson, Director of the Jodrell Bank Discovery Centre, and Professor Tim O’Brien, Associate Director of Jodrell Bank Observatory, have been awarded the Kelvin Medal of the Institute of Physics for outstanding contribution to the public understanding of physics.

The Institute’s citation recognises their work in creating a new, award-winning Discovery Centre at Jodrell Bank and the development of an education programme that reaches 16,000 schoolchildren every year.

Over the last eight years Teresa and Tim have used the Jodrell Bank site to create a highly effective hub for the promotion of physics, including the development of a hugely increased national media profile.

Teresa secured funding and oversaw the construction of a new Discovery Centre in 2010, becoming its inaugural Director at opening in April 2011. Tim created the Centre’s innovative exhibition, drawing on research across the world to ensure the highest level of engagement with physics.

The Centre has won awards each year since opening and visitor numbers are now 160,000 a year. A new education programme was launched in 2011. This now delivers hands-on physics sessions to thousands of school pupils each year. Demand is so high that The University of Manchester, with the generous support of the Wolfson Foundation, is investing in an additional building which will open in the autumn, doubling capacity over the coming years.

In order to reach diverse audiences, the Centre developed an innovative new events programme, including the ‘Live from Jodrell Bank’ science-music festivals. Beginning in 2011 and featuring bands such as the Flaming Lips, Elbow, Sigur Ros, New Order and the Hallé Orchestra, the events have engaged thousands of festival-goers with a wide range of research in the science arena. This has included the Large Hadron Collider, graphene, photon science, the physics of music and much more.

Alongside this, Tim delivers talks from the main festival stage, discussing latest research and including live link-ups to observatories in Chile and South Africa. Since 2011 these festivals have reached an audience of about 45,000 young adults. The Centre has also piloted new approaches to engaging girls with physics via its popular ‘Girls Night Out’ events.

“We are delighted and honoured to receive this award from the Institute of Physics,” said Tim. “I’ve always prioritised public engagement alongside my research and teaching. It’s been particularly rewarding to contribute to the exciting recent developments at Jodrell Bank.”

Teresa added: “It is very special to be recognised by the Institute for the work we’ve done here. We’re delighted that Jodrell Bank is a place of inspiration for the scientists of the future as well as a site for world-leading research. The new Discovery Centre is packed with school groups during the week and families at the weekend. I feel very proud to have been able to help create a place where inspiration and learning takes place.”

This is the third time in five years that Manchester physicists have been awarded the Kelvin Medal: Professor Jeff Forshaw won the award in 2013 and Professor Brian Cox in 2010.

Professor Stephen Watts, Head of the School of Physics & Astronomy, said: “The impact of our research beyond the academic environment is something we see as equal in importance to our research and teaching. We are very proud, therefore, that the Institute has again recognised the strength of our public engagement work here in Manchester.”

Jodrell Bank Discovery Centre (http://www.jodrellbank.net) welcomes visitors to the Observatory and engages them directly with research going on at the site.  The Centre features exhibitions on topics from cosmology to the search for life, including the work of the Lovell Telescope and others around the world. It offers opportunities to meet the scientists, short courses and other events, including in literature, music and the arts. Visitors can also explore extensive gardens and enjoy the award-winning café. The Centre has won several awards since opening in 2011, including Marketing Cheshire’s Tourism Attraction of the Year in 2011 and 2012, Best Tourism Event in 2013, while Live from Jodrell Bank won the award for Extreme Creativity in the 2012 UK Festival Awards.

The tradition of excellence of the School of Physics & Astronomy (http://www.physics.manchester.ac.uk) has been established by many eminent teachers and researchers, including 11 Nobel Prize winners, such as Rutherford, Bohr, Bragg, and Blackett. The School’s most recent Nobel laureates are Sir Andre Geim and Sir Kostya Novoselov, who were awarded the honour in 2010 for their pioneering work on graphene. Today, the School remains a leading centre of research across most areas of physics, and a steady influx of new research physicists and teachers means it continues to grow and keeps its courses and research at the cutting edge. It takes in about 250 new undergraduates and 50 postgraduates each year, and employs more than 80 members of academic staff and 100 research fellows and associates.

The full list of Institute of Physics award winners, including early career, education and outreach awards, can be found at http://www.iop.org/awards

The Kelvin Medal was instituted by the Council of the Institute in October 1994 in recognition of the importance of promoting public awareness of the place of physics in the world, of its contributions to the quality of life and its advancement of an understanding of the physical world and the place of humanity within it.

Previous winners of the Kelvin Medal can be found at http://www.iop.org/about/awards/education/kelvin/medallists/page_38639.html