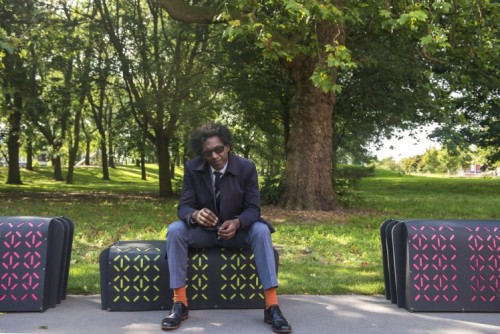 Poet Lemn Sissay MBE will be officially installed as Chancellor of The University of Manchester today (Wednesday) as part of the institution’s Foundation Day celebrations.

The election of a new Chancellor for the University followed the completion of the seven-year tenure of former incumbent, Tom Bloxham MBE, the founder of Manchester-based property development company Urban Splash. Lemn took up his new role on 1 August but today marks his official installation.

Lemn is an associate artist at the Soutbank Centre, patron of the Letterbox Club and fellow of the Foundling Museum. He is also the author of a series of books of poetry, alongside articles, records, radio documentaries, public art, and plays.

He said: “I could not be in a more inspiring place on Earth than The University of Manchester. I want to embody the spirit of the University as its Chancellor I’m looking forward to meeting people from all parts of the world and trumpeting our ideals.”

The University’s President and Vice-Chancellor, Professor Dame Nancy Rothwell, said: “My warm and sincere congratulations go to Lemn on his installation as our next Chancellor, as well as to all five of our honorary graduates who are joining us today to receive their awards and help celebrate our Foundation Day.”

Professor Rothwell added: “Now, just over a decade after the merger and the publication of our original strategic plan, it is the right time to take a hard look at our performance and to set out a new vision. We will build upon the original plan and set challenging new targets that take account of the changes that have taken place over the past decade across the higher education sector and in wider society.”

You can watch the full ceremony below: