The University of Manchester Library has been awarded a £40,000 grant for a new cataloguing project titled ‘What the Papers Say: The Editorial Correspondence of C.P. Scott in the Guardian Archive’. 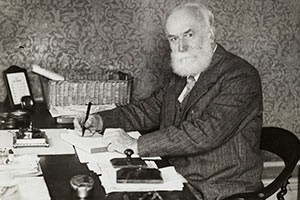 The Guardian Archive is one of the largest and most significant collections held by The University of Manchester Library. At the heart of the archive is the correspondence of Charles Prestwich (C.P.) Scott, who edited the newspaper from 1872 to 1929. He is perhaps the most significant figure in the newspaper’s history, responsible for transforming the Guardian from a provincial journal into a newspaper of national and international standing.

The project, which is being funded by the National Cataloguing Grants Programme for Archives, aims to produce a detailed catalogue of Scott’s Editorial Correspondence. This comprises around 13,000 letters exchanged with 1,300 individuals including leading statesmen and politicians such as Herbert Asquith, David Lloyd George, Winston Churchill and Ramsay MacDonald.

Scott was an influential figure in Liberal circles, through a consistent left-of-centre stance in his editorship of the Guardian as well as holding the post of president of the Manchester Liberal Foundation and serving as a Liberal MP for 11 years. His interest in causes such as British policy in South Africa, women’s suffrage, Irish nationalism and the establishment of a Jewish homeland is illuminated in correspondence with figures like suffragette Emmeline Pankhurst, Irish nationalist Sir Roger Casement, and Zionist Chaim Weizmann. Significant literary figures also feature, among them George Bernard Shaw and Arthur Ransome (the newspaper’s Russian correspondent for a time).

Alan Rusbridger, former editor of the Guardian, wrote in his letter of support for the project:

“The importance of the Manchester material cannot be exaggerated… The resonances with contemporary issues, such as anti-Semitism, the financial crisis and militarism, are astonishing…

"It is therefore essential that Scott’s vast editorial correspondence is fully catalogued and made available online, in order to unleash its remarkable potential.”

“Our Guardian Archive is one of the most heavily used archives within our Special Collections. Having a proper catalogue for this collection will really transform the service we offer to students, researchers and the general public, as well as opening the archive up for a wealth of new uses.

"We feel that the Editorial Correspondence of C.P. Scott is truly deserving of this grant, and are excited to get started!”

The Guardian Archive was donated to The University of Manchester Library in 1971 and is housed in The John Rylands Library. It dates from the newspaper’s establishment in 1821 to the early 1970s and also includes material relating to the Guardian’s sister newspaper, the Manchester Evening News.

This is the second award the Library has won to enhance the catalogue for the Guardian Archive this year, following success in winning the 2015 Business Archive Council’s cataloguing grant for ‘Behind the headlines: documenting the people in the Guardian Archive’ back in August.

The archive is of huge significance for Manchester. Founded two years after the momentous Peterloo Massacre, the Guardian has a key place in the city’s rich history of radicalism, protest, and campaigns for social and political reform.