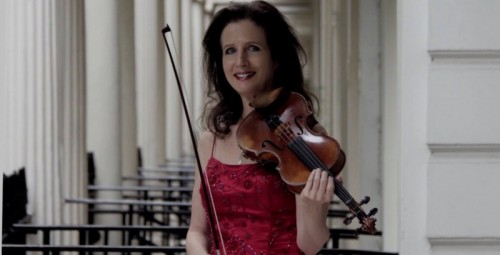 Renowned violinist Madeleine Mitchell will be performing a new piece by University of Manchester Professor of Social and Autoethnographic Composition Kevin Malone in a recital celebrating music by women.

The unique work for solo violin and electronics, written as a gift to Mitchell, is entitled Your Call is Important to Us and uses recordings of women's voices from call waiting recordings interwoven with a violin solo.

Described by The Times as “one of the UK’s liveliest musical forces”, Mitchell has performed as a soloist and chamber musician for the BBC Proms, BBC Radio 3, and at the Wigmore and Barbican Halls in London. She has traveled extensively internationally, performing at illustrious events including the British Embassy in Rome’s ‘A Century of British Music’ event to mark the Queen’s Jubilee.

A Fellow of the Royal Society of Arts since 2000, the award-winning musician also founded the Red Violin Festival in Cardiff, the first international celebration of ‘the fiddle’ in the arts, and she has recently won a Royal Philharmonic Society Enterprise Award for her creative project linking art and music in film with the current V&A Fabergé exhibition.

In addition to Your Call is Important to Us, by Kevin Malone, Mitchell’s Martin Harris Centre performance – which is accompanied by Nigel Clayton on the piano – will include pieces written for her by Errollyn Wallen CBE and Sadie Harrison, whose work Aurea Luce features on Mitchell's album Violin Muse. They will also perform the romantic Nocturne by Lili Boulanger (from Mitchell's album Violin Songs) and Romance by Amy Beach.

The lunchtime concert, which is free to attend, welcomes all music lovers and is bound to be a stellar string event. The premiere of the Malone work will be recorded live for inclusion on Mitchell's forthcoming album.

The concert will take place on Thursday 17 March 2022 at The University of Manchester’s Martin Harris Centre from 13.10 – 13.55 in the Cosmo Rodewald Concert Hall, Bridgeford Street, off Oxford Road, Manchester M13 9PL.