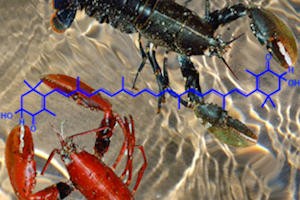 For the first time scientists have come up with a precise explanation for why lobsters change colour from blue/black to red when cooked.

And the findings could have uses in the food industry and even in the delivery of some anti-cancer drugs.

When alive and living in the sea, lobsters are naturally a dark-blue/black colour. It is thought that natural selection led to this as it makes them harder to spot for predators. But put them in a pan of boiling water and they soon turn the familiar orange-red that is the colour that most people think for lobsters, ie on their dinner plates.

Now scientists from the School of Chemistry at The University of Manchester with their international collaborators have come up with a precise explanation for why, after years of academic discussion. In a paper published in one of the journals of the Royal Society of Chemistry the team describe their findings.

The key is a chemical called astaxanthin, which has the orange-red colour of a cooked lobster, and how it interacts with a complex of proteins called crustacyanin which lobsters produce.  The reaction of astaxanthin with the protein complex gives the creature its dark blue colour. But crucially, when the lobster is cooked the protein is denatured and the astaxanthin is released and reverts to its orange-red state. This much was known from the X-ray crystal structure published by members of the same team in 2002.

The remaining scientific issue was the mechanism underlying the colour shift of free to bound astaxanthin.  This is a much more complicated question! The clue is that astaxanthin can behave as an acid, a property that has emerged as important when it reacts with the lobster’s crustacyanin proteins. It is this that the new publication has discovered to create the blue colour.

Professor John Helliwell of The University of Manchester, who led the team which carried out the research, said: “Over the last thirteen years since our X-ray crystal structure there have been competing groups studying this coloration mechanism, but hopefully now the issue is solved. It is a scientific curiosity, but it may also have important applications in the real world.”

“The coloration is quite a complex process to do with the 3 dimensional structure of the proteins in complex with the astaxanthins it binds, and the implications could be very useful.”

“For example astaxanthin is an antioxidant, so it has many health properties. But because it is  insoluble in water the problem is how to deliver it to a target. But our findings suggest that mixing it with crustacyanin could do that and allow the astaxanthin to get to a target such as via the stomach.”

“It could also be used as food dye, for example to help create blue coloured ice cream.  Or it could be used in food stuffs to help people know when food has been cooked properly; a dot on the food that changes colour when it reaches a certain temperature could be used.”

“Most fundamental of all is arousing the curiosity of children and the public in basic science and our marine environment. In the era of climate change it is important for all to think about the delicate nature of life and the sustainability of life on the planet. How and why has lobster evolved this elaborate and delicate coloration mechanism? It is a beautiful and yet intriguing phenomenon.”

The paper On the origin and variation of colors in lobster carapace has been published in Physical Chemistry Chemical Physics, a journal  of The Royal Society of Chemistry DOI: 10.1039/c4cp06124a