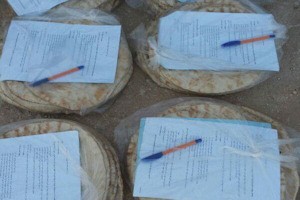 Families living in and affected by the conflict in Syria have been receiving parenting advice from experts at The University of Manchester via a daily bread delivery service.

Parents need urgent help to parent children caught up in conflicts - many of whom will be displaying signs of distress, earlier research has shown.

This unique trial study, led by psychologists from The University of Manchester, has seen 3,000 leaflets sent to families in Syria using a bread run set up by Khayr Charity Foundation of the NGO WATAN.
Around 1,770 completed questionnaires from parents involved in the trial were returned to the UK showing bread deliveries are a useful method to get urgent advice through to families displaced by conflict and can be utilised further in the future. The Manchester team will now analyse how useful the advice has been to parents.
The project comes as over one million Syrian children have been forcibly displaced from their homes and moved to neighbouring countries for safety. UN figures show three million remain displaced inside the country.
Aala El-Khani, from The University of Manchester who is based in the UK and working on the research project with aid workers on the ground near the Turkish/Syria border, said:
“Offering parents support to help their children early on can reduce the risk of children developing major mental health problems.
“Given the scale of the problem in Syria, getting information to families is a real challenge. Using the bread delivery was identified during my interviews with aid workers as a way of providing information to families at a population level to maximise our reach.
“A similar approach was used to deliver diarrhoea treatment to poor communities in Zambia using specialised packaging that fitted into crates around Coca Cola bottles.”
The project follows earlier research by The University of Manchester which saw Ms El-Khani, via a collaboration with Generation Freedom, visit three refugee camps during the last two years to conduct focus groups with parents and interview professionals involved in humanitarian support.
Ms El-Khani added: “We know from our earlier research that exposure to extreme violence and loss, followed by the disruption of leaving home with few or no possessions and adapting to the new and often poor living conditions has left children extremely vulnerable to mental health problems.
“Parents reported urgently wanting help in understanding how best to parent their children. They made clear their need for help with behavioural and emotional changes in their children, and in their parenting approaches.
“One mother told us ‘They cry at night, they scream a lot while they are sleeping. They are very angry. They have so many unanswered questions that I do not know how to answer”.”
The leaflets sent out with the bread were produced by staff at The University of Manchester and translated into Arabic. They explain the different types of behaviour children might go through as a result of their displacement such as bed wetting, becoming unusually aggressive or active or shy and withdrawn, loss of appetite and flashbacks. There are also tips on providing warmth and safety, giving praise, spending time together and talking, encouraging play and maintaining a routine.
Parents have been asked to complete a questionnaire about how helpful the information is, who they talk to about their problems and what further information they might need so that the team can look to improve mental health support to displaced families such as those living in refugee camps.
Professor Rachel Calam, Professor of Child and Family Psychology and Head of the School of Psychological Sciences at The University of Manchester, said: “Parental support and family cohesion is very important to build resilience and optimise mental health in refugee children and our research showed urgent need for preventive interventions.
“Being able to receive information back from parents is essential so we can assess whether these interventions provide benefit to children and their families. We want to know whether this can prevent or reduce mental health problems in children and improve adjustment in families.”

Images of the distribution in Syria and the UK team available on request.

The UN Refugee Agency recently reported that the number of people living as refugees from war or persecution reached an all-time high since World War Two of 51.2 million people - a dramatic rise of 6 million from the previous year, which in part, is due to the conflict in Syria.
The project is being run by Aala El-Khani, Dr Kim Cartwright and Professor Rachel Calam, in the Parenting and Families Research Group based in the School of Psychological Sciences at The University of Manchester.
Members of the team are available for broadcast and newspaper interviews. For further information, please contact Alison Barbuti, Media Relations Officer, Faculty of Medical and Human Sciences, The University of Manchester, 0161 275 8383 / Mob. 07887 561 318 or email alison.barbuti@manchester.ac.uk.
Some modules are disabled because cookies are declined. Accept cookies to experience the full functionality of this page.
ACCEPT COOKIES
We use cookies to optimize the website, no personal information is stored. Learn more
DECLINE COOKIES ACCEPT COOKIES