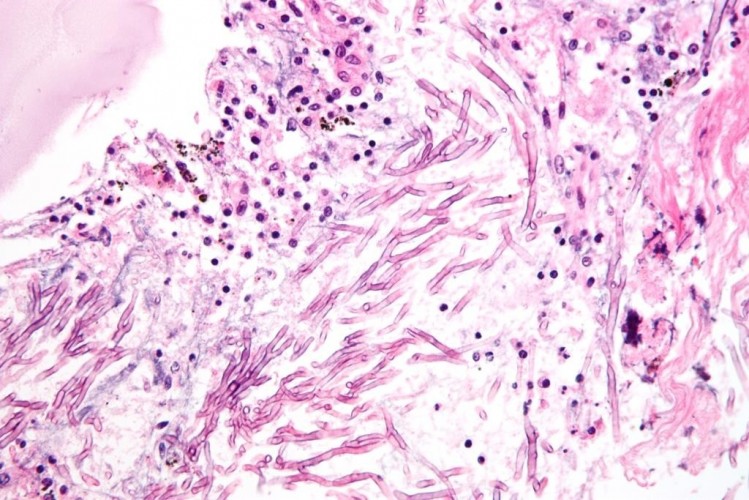 Researchers gathered in Manchester for the Advances Against Aspergillosis international conference have had the first glimpse of new antifungal agents. Problems with toxicity and resistance limit treatment options currently for the millions of patients worldwide who need antifungal therapy each year.

Three new antifungals were profiled: CD101 from Cidara Therapeutics in San Diego, F901318 from F2G in Manchester and PC945 from Pulmocide in London, as well as earlier stage peptides and new antifungal targets.

Dr Kasuhiro Ito from Pulmocide, working with researchers at Chiba University, Japan, demonstrated that inhaled PC945 was highly effective in early therapy of life-threatening invasive aspergillosis in mice. The compound is a novel azole with activity about 100-fold more against Aspergillus fumigatus than voriconazole, the leading treatment currently. PC945 also reduced inflammation in the lung. PC945 represents the first of a new generation of inhaled antifungals, primarily for fungal asthma, cystic fibrosis and prevention of invasive aspergillosis. Clinical studies of aerosolized PC945 are likely to commence in early 2017.

Dr Nicola Beckman from F2G presented work on the novel compound F901318 and its activity against resistant fungi. F901318 compound is an orotomide, with a new mechanism of action disclosed at ICAAC in September 2015. It is highly active against pan-azole resistant Aspergillus fumigatus, other Aspergillus species and multi-resistant and currently untreatable Scedosporium spp. With the rise in azole resistance across the world (also profiled at the conference), a new class of antifungal is clinically required. Clinical studies of intravenous and oral F901318 are likely to commence in late 2016.

Dr Miesel presented the efficacy of Cidara Therapeutics’ CD101, a novel long acting echinocandin, against invasive aspergillosis. CD101 was highly effective, similar to amphotericin B, in this survival experiment. CD101 will be an intravenous antifungal, with the potential for higher drug exposures than currently marketed echinocandins and once weekly treatment, enabling inpatient and outpatient use and earlier hospital discharge. Clinical studies of CD101 are scheduled to start in the first half of 2016. CD101 has received QIDP, Fast Track and Orphan Drug Designation from the FDA for the treatment of candidemia and invasive candidiasis.

This broad pipeline of antifungals is really welcome. Our clinics have many too many untreatable patients, deteriorating and really unwell. My global clinical colleagues and I were really excited to hear about these many development programs and the demonstration of real activity in tough tests of antifungal activity.

Professor David Denning of The University of Manchester (Conference Chairman)
„

‘Lost in the community’ blog by Chris Phillipson reviews Covid-19 and care homes
University of Manchester to decarbonise its investment portfolio
How to understand Obamagate – Donald Trump’s latest conspiracy theory
Weight and blood pressure greater in young people who develop type 2 diabetes
MCI & Creative Manchester team up with Chengdu gallery for 2020 photo competition
The reshaping of city transport
Some modules are disabled because cookies are declined. Accept cookies to experience the full functionality of this page.
ACCEPT COOKIES
We use cookies to optimize the website, no personal information is stored. Learn more
DECLINE COOKIES ACCEPT COOKIES