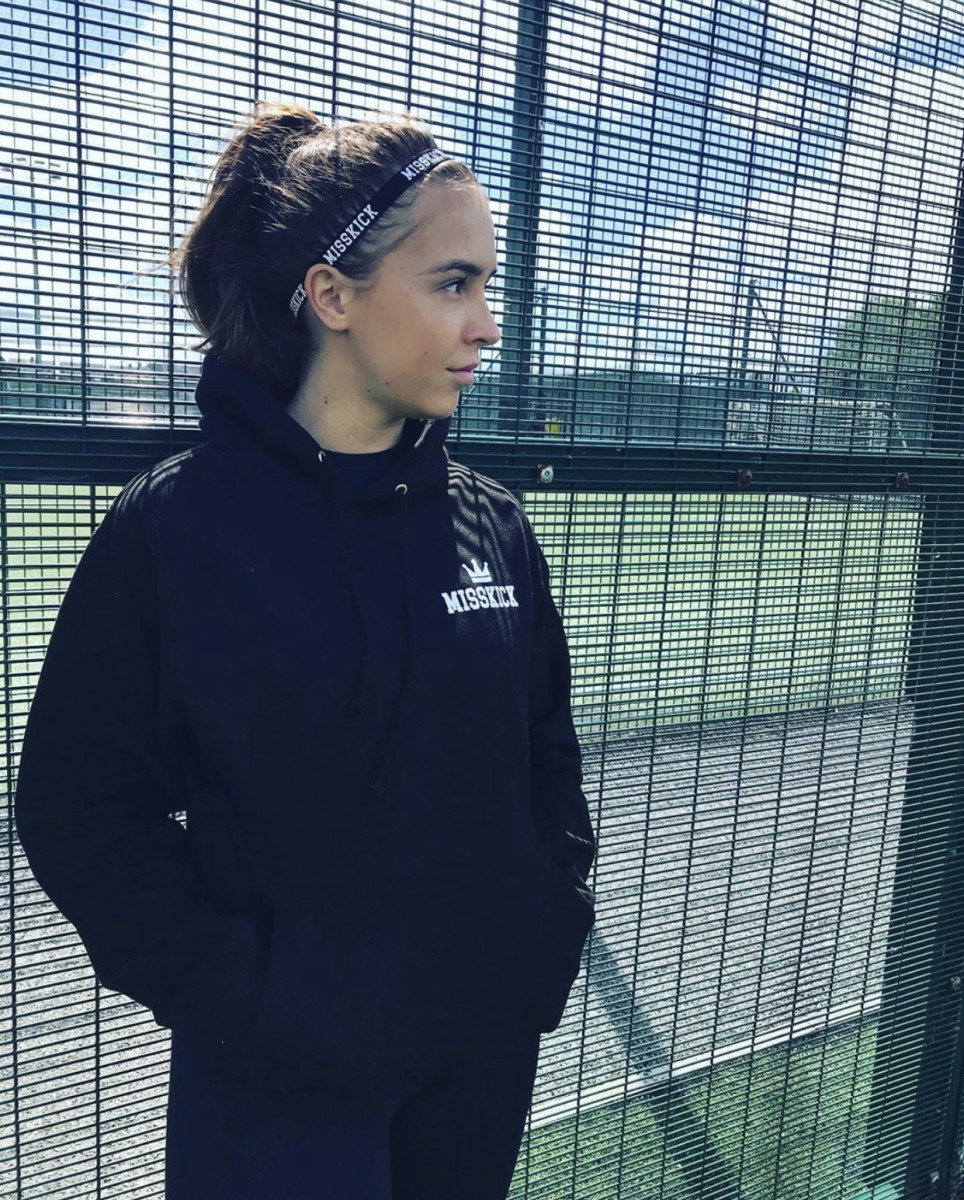 A University of Manchester graduate is raising money for girls’ football through a company she started while studying for her Bachelor’s degree.

Grace Vella, 22 and originally from Skelmersdale in West Lancashire, graduated on Tuesday (16 July) from The University of Manchester’s Faculty of Biology, Medicine and Health. She leaves not only with a First Class honours degree in Psychology, but also at the head of a new company that aims to empower and engage women and girls in football.

Started by Grace in her third year, while she was on placement with a charity supporting young homeless people, MissKick was launched at the annual Skem Athletic Tournament in 2018. Through the sale of female-oriented football merchandise, MissKick is able to fund grassroots girls’ football teams, with over £500 raised so far.

As a student of The University of Manchester, Grace was eligible to take part in AccelerateME, a student start-up programme based in Greater Manchester. After a selection process in which she had to pitch her idea, Grace was one of 15 finalists from 125 applicants. Through the programme, she was given funding, support and office space for six months, something she says supported her in establishing MissKick.

Football has always formed a large part of Grace’s life. As a child, she played for her local team, before signing with Liverpool at 13 years old. At 18, she moved to Manchester City, and while she then left to pursue her degree in Psychology, she remains heavily involved in the sport, currently playing for Chorley FC.

Manchester will always hold a special place in my heart. I’d never known anything other than Skelmersdale, so moving to a city like Manchester was a big transition. I’ve the best memories, and walking away with my first class degree is all that I’ve ever wanted. The University were super supportive of MissKick. I can’t thank my Academic Advisor, Alison, enough for the support she has given me.

One of her long-term goals for MissKick is to challenge the perception that football is a sport “just for boys”, something she came up against growing up. The recent surge of popularity around the FIFA Women’s World Cup has encouraged Grace that the women’s game is being noticed and taken seriously. As she points out, viewing figures for the semi-final game between England and the USA beat those of the men’s game’s Champions League final earlier this year.

“Manchester will always hold a special place in my heart. I’d never known anything other than Skelmersdale, so moving to a city like Manchester was a big transition. I’ve the best memories, and walking away with my first class degree is all that I’ve ever wanted. The University were super supportive of MissKick. I can’t thank my Academic Advisor, Alison, enough for the support she has given me.”

Needless to say, Grace’s achievements during her time at The University of Manchester have not gone unnoticed. Alison Fisher, Programme Director of BSc Psychology at the University, complimented the “outstanding” student for her accomplishments so far, adding: “Grace’s hard work, determination and her drive to improve the lives of others embodies what it means to be a Manchester graduate; we are incredibly proud to have her as a member of our alumni community.”

After graduating, Grace plans to focus on MissKick. She said: “Studying at university and trying to work on my business has been super tough! So I am excited to be able to have the time to focus on just the one thing. I’d never say never to coming back to do a Masters, however, for the meantime, I feel the best option is to put all my energy into MissKick, as I want to be able to give myself the best opportunity for this to work.”