Manchester graphene paper among top 100 citations of all time

Manchester graphene paper among top 100 citations of all time 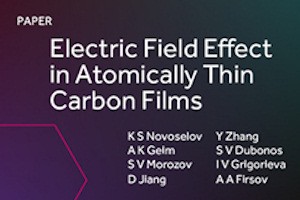 The groundbreaking Science paper that laid out foundations of graphene research is one of the most cited publications of all time.

Despite only being brought out in 2004, the seminal work 'Electric Field Effect in Atomically Thin Carbon Films' has been cited more than 15,000 times and is at number 65 in the top 100 list, produced by the journal Nature to mark the 50th anniversary of the citation system. Only two other papers in the list, which review popular research software, were written later.

Citations, in which one paper refers to earlier works, are the standard means by which authors acknowledge the source of their methods, ideas and findings, and are often used as a rough measure of a paper’s importance.

The Nature article gives a comparison with Mount Everest where these 100 papers represent a 1 cm thick tip at the top of the amount of papers published over the years.

Manchester researchers isolated graphene at The University of Manchester in 2004, and two of them, Sir Andre Geim and Sir Kostya Novoselov, later received the Nobel Prize for Physics for demonstrating graphene’s extraordinary properties set out in the paper.

Another graphene paper, entitled ‘The rise of graphene’ and published in Nature Materials in 2007, has more than 11,000 citations and should enter the top 100 before long.

In addition, Manchester researchers have between more than 15 graphene and related 2D materials papers cited more than 1,000 times – a unique feat for one subject area. There have been only 15,000 research papers in this category, roughly a metre at the paper mountain’s top, according to Nature.

The statistics provide another demonstration of the fascination with graphene, which is the strongest, thinnest and most conductive material known to man.

Sir Andre said: “I remember having a bet with one of my colleagues that this manuscript not yet published at the time would gain more than 500 citations. He doubted saying that 500 was a very big number. How wrong we were.

“It should be said that citation numbers is the worst system to judge research quality, except for all the others that I am aware of, if I may paraphrase Winston Churchill. Citations should never be considered as a sole indicator of research quality, especially by funding agencies.”

The most cited work is a 1951 paper describing determining the amount of protein in a solution. It has now gathered more than 305,000 citations — a recognition that always puzzled its lead author, the late US biochemist Oliver Lowry. “Although I really know it is not a great paper … I secretly get a kick out of the response,” he wrote in 1977.

Images and more information on graphene can be found at www.graphene.manchester.ac.uk