The first-ever conference for the Innovation of Justice campaign, which campaigns in defence of people who have been victims of miscarriages of justice, has been hosted by The University of Manchester’s School of Law. 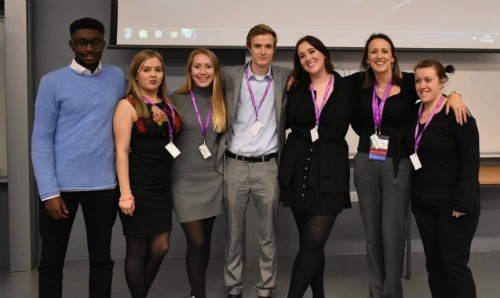 The non-profit campaign was co-founded by Liam Allan, who was falsely accused of rape and exonerated after it was revealed during the court case the police had failed to disclose vital evidence proving innocence. The campaign is also co-founded by Annie Brodie-Akers, a University of Sheffield law student and the President and Chair of the Miscarriage of Justice Awareness Society. The campaign hopes to break down the barriers between victims of miscarriages of justice and those who can change and influence the law. The founders believe that the UK’s criminal justice system needs repair and reform, and aims to campaign in solidarity with people who don't currently have a voice and bring it to the forefront of the government’s mind.

The conference covered a range of topics including issues facing the legal profession, disclosure failings, false allegations and wrongful convictions. Many people who have faced these issues spoke at the event, including Eddie Gilfoyle - who was released in 2010 after being sentenced to 18 years for the murder of his pregnant wife – and Michael O’Brien, one of the wrongfully convicted Cardiff Three, who detailed his struggles in prison and after his release.

Mark George QC also spoke about the increasing number of people unable to appoint a lawyer because of changes to legal aid, and described this as ‘simply unacceptable’.

Liam Allan, the 22-year-old student who was wrongfully charged with 12 counts of rape and sexual assault last year, was also at the conference. His barrister Julia Smart outlined the extraordinary failings of the police and the prosecuting authorities in his case. She spoke of finding herself on the week of his trial with all of the material required to prove beyond a doubt that he was a wholly innocent man, but this had not been previously disclosed to the defence. Liam closed the day with a positive speech about the conference, hope, and achieving the seemingly impossible.

“The School of Law and the Miscarriages of Justice Review Centre are so proud and excited to be hosting the first conference,” said Professor Claire McGourlay from The University of Manchester. “We have all worked incredibly hard to pull it all together, and behind this enthusiasm and dedication is a belief that our criminal justice system needs reform and investment.”

“Our justice system is in crisis and has been for a long time. The public and politicians need to listen and lead change before yet more innocent people end up in prison or suffer what Liam and many offers have.”

“The team behind Innovation of Justice cannot thank The University of Manchester’s School of Law enough for helping us with our first event,” said Annie Brodie-Akers. “Their commitment and dedication to the project is what has made it as successful as it is now. We are proud to host this first event with Manchester, and wish to say a special thanks to them for assisting us in this journey for the past few months.”