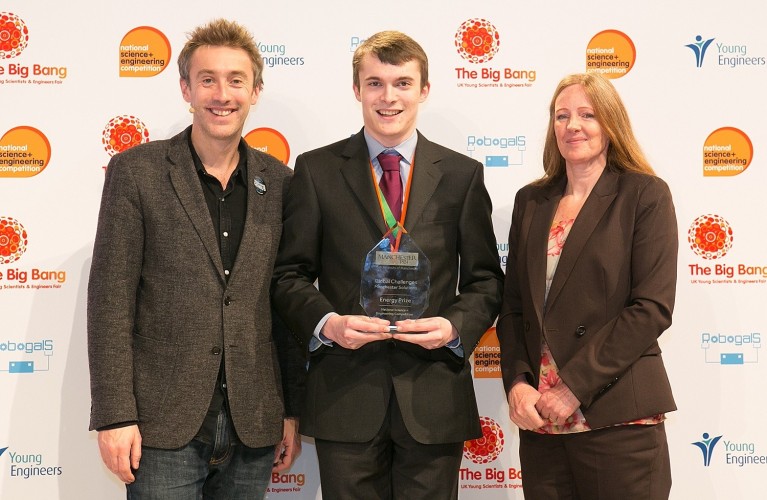 The prize is awarded in recognition of innovation by young scientists and engineers in energy, a beacon of research excellence at The University of Manchester.

Alexander investigated the effectiveness of paraffin wax when embedded into a concrete brick to be used for house building during a Nuffield Foundation-sponsored placement with Cambridge-based research and technology organisations TWI.

Fundamentally, with this technique, when a house warms up the wax melts to absorb and store heat - but as the house cools the wax solidifies again to release the stored heat back into the home, thereby maintaining a heat balance.

I’m delighted to have been awarded the prize by The University of Manchester. This will really inspire me to continue my research, and look to see how I can make this into a real-world application.

Alexander conducted an experiment embedding a capsule of paraffin wax into a reinforced steel concrete brick which he moulded himself.

“Results revealed that this construction has real potential to be used as a thermal energy store in domestic buildings,” explained Alexander. “However, further research is needed around the thermal conductivity of the container holding the paraffin core as the heat appeared to be trapped within the core as it could not be released fast enough.”

Teresa Chilton, Project Manager for Manchester Energy, said: “The University of Manchester judges were impressed with Alexander’s research into using Phase Change Materials (PCM) for thermal energy storage – an active area of contemporary research. He demonstrated an excellent understanding of the theory which he then applied in the design of heat storage in house bricks.

“The bricks contained paraffin wax – the PCM – as well as steel to maximise heat transfer to the paraffin and provide additional strength. The research was well conducted, presented with great enthusiasm and Alexander held up to some tough questioning from the judges.”

Key academics from CIRCO, Photobiology and Centre for Health Informatics present 'staying fit in COVID' webinar
The University of Manchester launches its Innovation Factory
Introducing the new portal SALC: Connect, Engage, Inspire
Three is the magic number for Manchester academics at Teaching Excellence Awards
FSE celebrates Class of 2020 with virtual graduation series
A Pensions Advisory Group report continues its lasting impact
Some modules are disabled because cookies are declined. Accept cookies to experience the full functionality of this page.
ACCEPT COOKIES
We use cookies to optimize the website, no personal information is stored. Learn more
DECLINE COOKIES ACCEPT COOKIES