A lecturer at the University of Manchester’s School of Law has presented his research into policing football hooliganism at the Department of Civil Defence in Queretaro, Mexico.

Dr Geoff Pearson, Senior Lecturer in Criminal Law, spoke to an audience of 300 stakeholders, including police officers, stadium safety managers and representatives of fan groups, to tell the story of British football hooliganism and how a combined effort of working on the legal framework, stadium infrastructure and proactive policing has helped to significantly reduce incidences of football hooliganism in the UK. 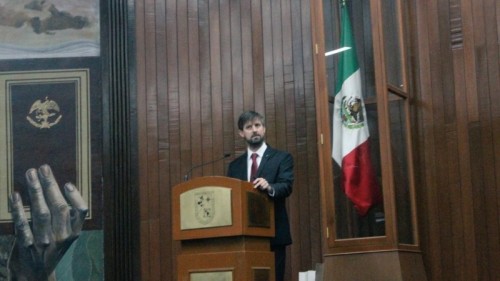 After initially using methods such as segregation, banning the consumption of alcoholic beverages and entry bans when hooliganism was rife in the 1970s and 1980s, modifications were then made to policing.

Dr Pearson noted that while some methods were effective, others were not or were counterproductive, but that ultimately by working together, incidences of football hooliganism in the UK today are greatly reduced both within stadia and their surroundings.