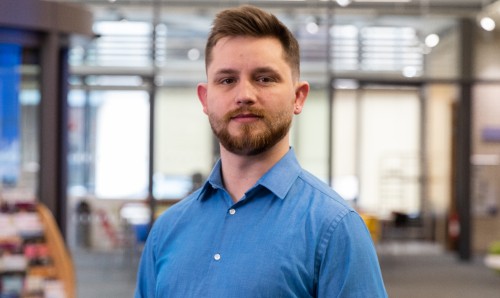 A University of Manchester music graduate has credited the strong foundations his degree gave him to help him win a top job at a world-leading new music group, saying his university career was the making of him.

Sebastian Huckle (MusB, 2012) has been appointed executive director of the Birmingham Contemporary Music Group (BCMG), overseeing the running of this exciting outfit, as well as liaising closely with the Artistic Director to deliver the BCMG’s artistic projects.

Huckle believes his degree gave him his first taste of leadership, having been president of Chorus and MUMS at Manchester, while his understanding of the music industry was springboarded by the arts administration module he took while studying.

“The University of Manchester is an astonishingly successful furnace for arts leaders,” he said.

“I left university with the skills and a very large amount of experience needed to forge a career in orchestral management. I was given a great grounding in arts administration through the arts admin module, and I was able to directly experience performances of some of the finest musicians in the world through the recitals and concerts at Martin Harris Centre, as well as at the Bridgewater Hall and at RNCM.”

Huckle’s work at BCMG will not only bring him into contact with some of the world’s leading musicians, but also tomorrow’s stars thanks to the group’s partnership with the Royal Birmingham Conservatoire, NEXT, which gives early career musicians the opportunity to specialise in contemporary performance, learning and performing alongside BCMG musicians.