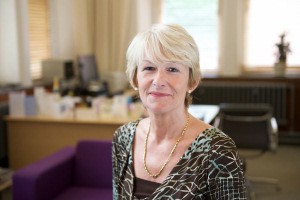 Professor Dame Nancy Rothwell has welcomed today’s announcement that Manchester will be European City of Science in 2016.

The Minister for Science and Universities David Willetts MP revealed this morning that the city has been selected to host the EuroScience Open Forum (ESOF) which takes place every two years – it was in staged in Dublin last year and moves to Copenhagen in 2014.

Professor Dame Nancy Rothwell, President and Vice-Chancellor of The University of Manchester, said:  “This exciting announcement cements Manchester’s position as a world leader in science and technology. This is Europe’s largest general scientific conference and it will bring 4500 delegates to the City in July 2016, including global scientific and technology leaders.

“The theme of the 2016 Forum will be breakthroughs in science and the conditions needed for a city to capitalise on scientific knowledge: from education through to investment in science.”

Professor Luke Georghiou, Vice-President for Research and Innovation at The University of Manchester, was jointly responsible for the team, in partnership with the City authorities, that prepared the successful the bid to host ESOF 2016.  He said: "We are delighted to be able to organise Europe's biggest general science conference in Manchester in 2016.  With Manchester's unique tradition in technology, industry, engineering, science and innovation we are sure that we can offer a superb environment for delegates from all over the world.

"We are looking forward to work together with EuroScience to make Manchester 2016 a worthy successor to Dublin 2012 and Copenhagen 2014, and we are grateful for the support from the Department of Business, Innovation and Skills."

The EuroScience Open Forum will be hosted in Manchester from July 22-27, 2016. The successful ESOF bid was put together by The University of Manchester, Manchester City Council, Visit Manchester, New Economy and Marketing Manchester.

Dr. Gail Cardew, chairperson of the ESOF Supervisory Board, said: "For a city to be awarded ESOF is to effectively give them the title of European City of Science. The city becomes a focal point for a discussion about science, not just among scientists but with the whole city.

"Manchester’s tradition of world class research together with engaging the public provides a perfect backdrop for ESOF, and we look forward to developing a strong and exciting programme with the President and Vice-Chancellor, Professor Dame Nancy Rothwell, and the Vice-President for Research and Innovation, Professor Luke Georghiou."

About ESOF
The EuroScience Open Forum, ESOF, is well established as the biggest general science conference in Europe. It was organized for the first time in Stockholm in 2004 and has since been held every two years, coming to Munich, Barcelona, Turin and Dublin. Copenhagen will host ESOF in 2014.
http://www.esof.eu/