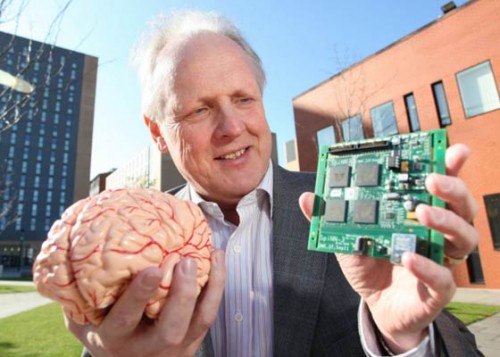 A flagship European project involving more than 100 universities and research centres has launched a range of prototype computer platforms to support brain research – and Manchester is right at the centre of it.

The ‘Human Brain Project’ has released six new informatics-based platforms across Europe which aim to accelerate scientific understanding of the human brain, make advances in defining and diagnosing brain disorders, and develop new brain-like technologies. The platforms are designed to help researchers advance faster and more efficiently by sharing data and results, and by exploiting advanced ICT capabilities. The platforms should enable closer collaboration between scientists to create more detailed models and simulations of the brain.

“This is the first time a neuromorphic platform of this scale has ever been made available to the wider community. I am hugely excited to see what the platform’s capabilities are, and what uses the community will find for it in the future. The machine moves the computational limits of real-time large-scale neural network modelling a lot further out than they have been up to now.”

The development of SpiNNaker has largely been funded by the UK Engineering and Physical Sciences Research Council (EPSRC), and the University of Manchester also contributed towards the project’s costs, as well as converting a space in the University’s Kilburn Building for the machine to be located and operated. The Human Brain Project is supporting the software required to make the platform available to the world-wide scientific community.