“It is a great honour to receive this award. I strongly believe that education is the best way for a country to progress. By helping people to become educated, I am making a contribution - however small - to the strengthening of ties and the future advancement of both nations.” 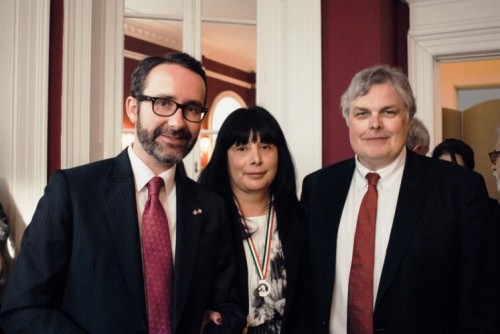 A professor from The University of Manchester has been presented with an Ohtli award, which is the highest recognition that a citizen of Mexico living overseas can receive from the country. Professor Teresa Alonso Rasgado of the University’s School of Materials received the honour from the Mexican ambassador to the UK, at a ceremony in their London embassy.

The word Ohtli means ‘pathway’ in Nahuatl (the language of the Aztecs). The prize is given once a year to a Mexican who has dedicated a significant part of their life and professional activity ‘paving the way’ for their compatriots abroad, easing the path for the younger generations who follow them.

Over the past two decades, Professor Rasgado has been a leader among the Mexican community of students who have come to the UK to study higher education. As the Director of the University of Manchester’s Latin American Programme, she has made the University the destination of choice for Mexicans in the UK and overseas, with over 300 postgraduate students currently studying there through the programme. Many of these students are from disadvantaged backgrounds, and after their studies they return to Mexico, where they make valuable scientific and technological contributions to the economy of their home country.

She is also the Honorary Representative of The Mexican Council for Science and Technology in the UK, and in this role she has created innovative initiatives in international student mobility and research which have resulted in benefits for both the UK and Mexico. Her work has also increased research collaboration between the two countries in the fields of science and engineering.

“I am so delighted to see Teresa being recognised for her commitment and dedication to the young people of her homeland,” said Professor Martin Schröder, Vice-President of The University of Manchester and Dean of the Faculty of Engineering and Physical Sciences. “She has been tireless in her efforts to enable the best and brightest Mexican minds from all backgrounds to come to Manchester, and the results are paying dividends for both Mexico and our University. She should be extremely proud of this fantastic achievement”.