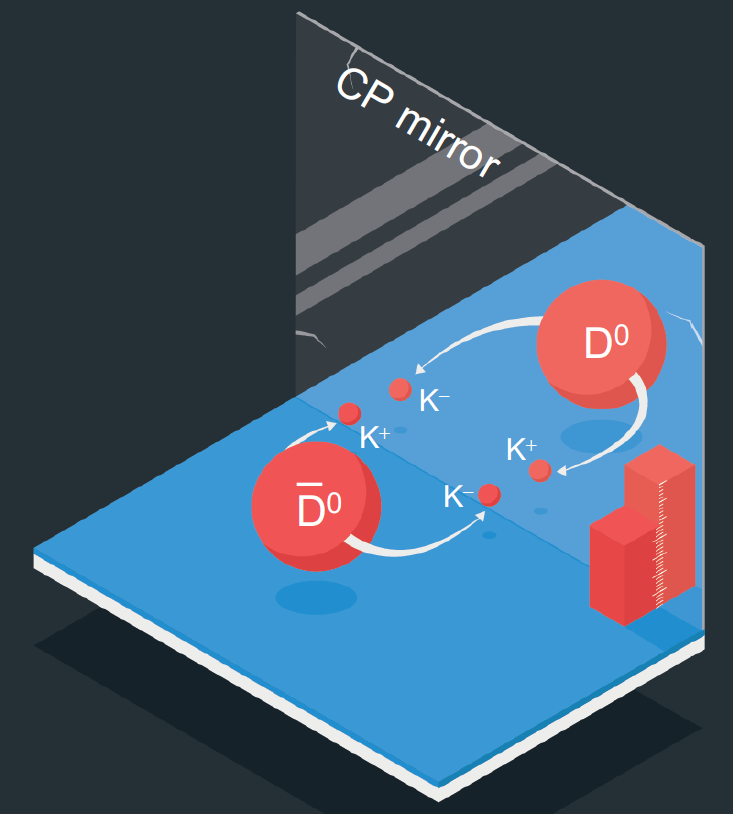 The Large Hadron Collider Beauty (LHCb) collaboration has observed a unique physics phenomenon in the decays of a particle known as a 'quark' for the first time.

The LHCb collaboration at CERN has captured the first instances of the matter–antimatter asymmetry known as CP violation in a particle dubbed the ‘D0 meson’. The finding, presented today at the annual Rencontres de Moriond conference and in a dedicated CERN seminar, is expected to make it into future textbooks of particle physics.

The LHCb collaboration has discovered matter-antimatter asymmetries in particles containing charm quarks, a type of elementary particle. The University of Manchester has been an internationally leading player in this field for many years. Following similar discoveries in particles containing strange quarks in 1964 and those with beauty quarks in 2001, this is the long-awaited missing piece of the picture of matter-antimatter asymmetries.

“The result is a milestone in the history of particle physics. Ever since the discovery of the D meson more than 40 years ago, particle physicists have suspected that CP violation also occurs in this system, but it was only now, using essentially the full data sample collected by the experiment, that the LHCb collaboration has finally been able to observe the effect,” said CERN Director for Research and Computing, Eckhard Elsen.

The University of Manchester has played a prominent role in charm physics, both within the LHCb experiment and worldwide over the past decade. Many of the research group’s activities have been pivotal in the build-up to this discovery.

Dr Marco Gersabeck, Lecturer in Physics, who leads the Manchester team, initiated the use of charmed particles produced directly in the proton-proton collisions of the Large Hadron Collider (LHC), an approach also used in the new measurement. Also part of the Manchester contingent is Prof Chris Parkes, Deputy Spokesperson of the experiment and Dr Evelina Gersabeck, who laid the groundwork for this measurement through her leadership in preceding analyses, along with Dr Mark Williams who currently leads the physics analysis working group that coordinated the publication.

The discovery of CP violation in charm is a major breakthrough in charm physics and for particle physics as a whole. Having pioneered the use of charm particles produced directly in the LHC collisions and having worked on the present analysis method before, it is great to have achieved this discovery. This marks the start of the era of precision physics in charm and I’m looking forward to many more exciting results

Dr Gersabeck of the School of Physics and Astronomy said: "The discovery of CP violation in charm is a major breakthrough in charm physics and for particle physics as a whole. Having pioneered the use of charm particles produced directly in the LHC collisions and having worked on the present analysis method before, it is great to have achieved this discovery. This marks the start of the era of precision physics in charm and I’m looking forward to many more exciting results."

The LHCb experiment specialises in ‘flavour’ physics, which studies the interaction of different types (flavours) of quarks. The two key areas of research are matter-antimatter asymmetries (CP violation) and rare particle decays. CP violation has been discovered in particles containing strange quarks in 1964, leading to the prediction of the existence of six quarks. It was then discovered in particles containing beauty quarks in 2001, confirming the mechanism predicted in the 1970s. Both discoveries led to Nobel Prizes.

CP violation is an essential feature of our universe, necessary to induce the processes that, following the Big Bang, established the abundance of matter over antimatter that we observe in the present-day universe. The size of CP violation observed so far in Standard Model interactions, however, is too small to account for the present-day matter–antimatter imbalance, suggesting the existence of additional as-yet-unknown sources of CP violation.

To observe this CP asymmetry, the LHCb researchers used the full dataset delivered by the Large Hadron Collider (LHC) to the LHCb experiment between 2011 and 2018 to look for decays of the D0 meson and its antiparticle, the anti-D0, into either kaons or pions. “Looking for these two decay products in our unprecedented sample of D0 particles gave us the required sensitivity to measure the tiny amount of CP violation expected for such decays. Measuring the extent of the violation then boiled down to counting the D0 and anti-D0 decays and taking the difference,” explained Giovanni Passaleva, spokesperson for the LHCb collaboration.

This discovery alone is insufficient for a full theoretical interpretation and as such it marks the start of a new era of precision measurements in charm physics.