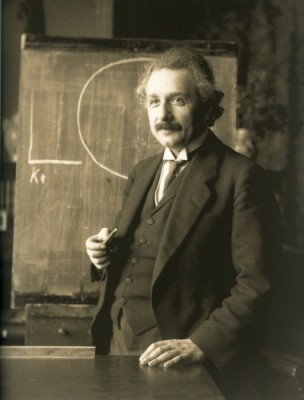 The legendary scientist Albert Einstein’s first UK appearance is one of the remarkable moments recaptured in a new book detailing Manchester’s trailblazing history in science and industry.

Dr James Sumner, a historian at The University of Manchester, rediscovered the story for Manchester: making the modern city, the official souvenir book of the EuroScience Open Forum in Manchester from 23-27 July.

Dr Sumner’s chapter covers the history of science in Manchester from the early Literary and Philosophical Society to the age of graphene.

Einstein was already world-famous when he came to Manchester in 1921. He attracted a packed audience to his explanation of the Theory of Relativity, though he spoke only in German.

A Manchester Guardian report, at the time, talked of cheering after the lecture was over.

The University also gave Einstein an honorary doctorate during the visit. The award, said the Guardian, was a ‘very distinct recognition of the University as a home of science.’

A lecture in Britain by Einstein, already in 1921 the most famous representative of German-speaking science, was an important step in mending scientific relations that had broken down in the First World War. Bringing the lecture to Manchester was a huge symbolic success for the city and its University.

The physicist was on his way back from a tour of the US to raise funds for the proposed Hebrew University of Jerusalem, alongside The University of Manchester-based scientist Chaim Weizmann.

Earlier in the day, Einstein had spoken to the University Students’ Jewish Society about establishing the Hebrew University.

The lecture was set up by the then vice-chancellor, Henry Miers, who was also Professor of Crystallography.

Einstein also took up invitations to lecture at Oxford and King's College London, but Miers was careful to make sure Manchester was first.

Though it is not certain where the lecture took place, it is almost certain to have been in the University’s prestigious Whitworth Hall.

Dr Sumner, who is based at the University’s Centre for the History of Science, Technology and Medicine, said: “A lecture in Britain by Einstein, already in 1921 the most famous representative of German-speaking science, was an important step in mending scientific relations that had broken down in the First World War. Bringing the lecture to Manchester was a huge symbolic success for the city and its University.

“That Einstein spoke entirely in German was no challenge for the Manchester Guardian, which was known for its scholarly and international reporting staff. The paper did a remarkable job in summing up Einstein’s explanation of non-Euclidean geometry for its readers.

“The civic worthies who had come to marvel at Einstein must have struggled to understand much of Einstein’s message, but there were clear hints of the human charm which ensured his lasting fame – or, as the Manchester Guardian put it, ‘the kindly twinkle which never ceased to shine in his eye.’”