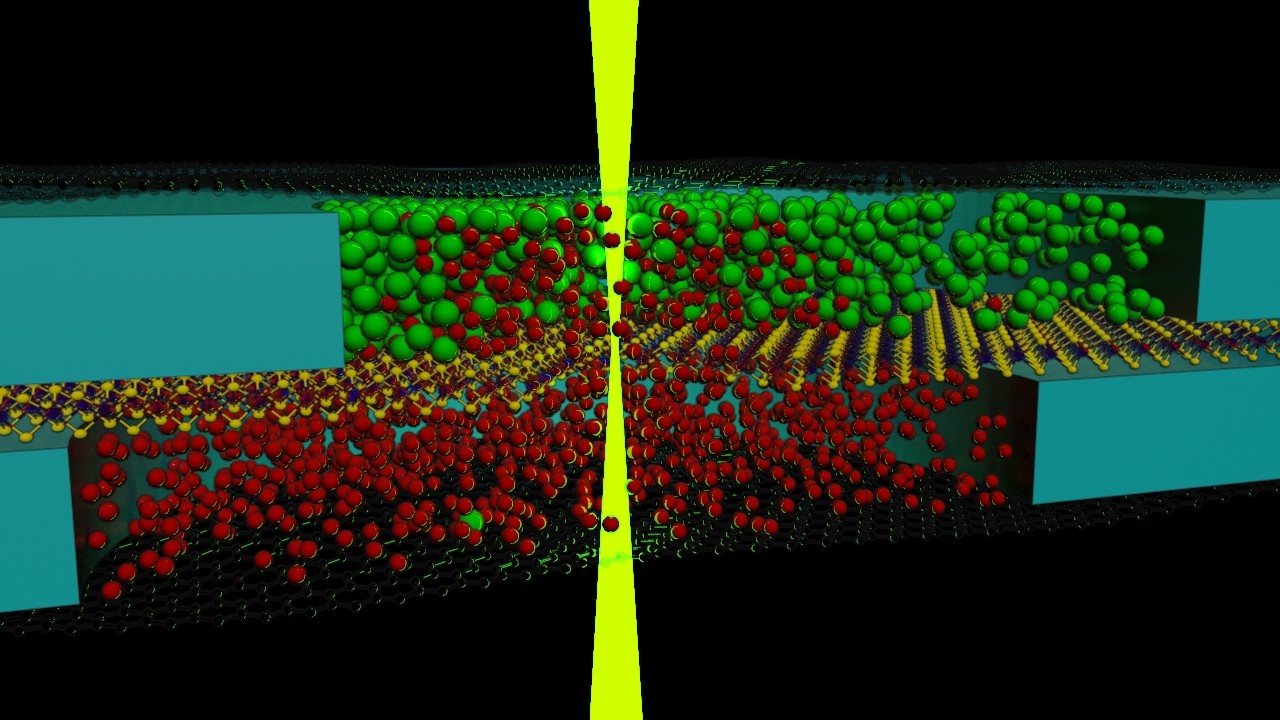 The ability to observe solution-based chemical reactions with sub-nanometre resolution in real time has been highly sought after since the invention of the electron microscope 90 years ago.

Imaging the dynamics of a reaction can provide mechanistic insights and signpost strategies for tailoring the properties the resulting materials. A transmission electron microscope (TEM) is one of a few instruments capable of resolving individual atoms, though conventionally it requires completely dry samples imaged in a vacuum environment, precluding any wet chemical synthesis.

Based on previous work developing graphene liquid cells that allow TEM imaging of liquid-phase nanostructures, a team of researchers based at The University of Manchester’s National Graphene Institute, collaborating with researchers at the Leibniz University Hannover, have shown that two solutions can be mixed inside the microscope and imaged in real time.

The new research, published today in Advanced Materials details a new imaging platform that has been used to investigate the growth of calcium carbonate. This material is key to many natural and synthetic chemical processes. For example, calcium carbonate is the principal component in the shells of many marine organisms and its formation process is affected by increasing ocean acidification. Calcium carbonate precipitation is also essential for understanding concrete degradation and the material is a ubiquitous additive for many products from paper, plastics, rubbers, paints, and inks to pharmaceutics, cosmetics, construction materials, and animal foods. Nonetheless, despite this widespread use, the crystallisation mechanism for calcium carbonate is widely debated.

So far we have focused primarily on characterising the formation of calcium carbonate, however we are optimistic that this type of experiment could be extended to study many other complex mixing reactions.

In this work the authors provide the key new experimental evidence to support a theoretically predicted complex crystallisation pathway. The team, led by Professor Sarah Haigh and Dr Roman Gorbachev, designed a stack of different two-dimensional materials that contained nanoscale liquid solution compartments formed in microwells etched in hexagonal boron nitride spacer. These microwells were separated by an atomically thin membrane and sealed with graphene which acted as a ‘window’ to allow imaging with the electron beam.

The two pockets of solution were then mixed in the microscope by focussing the electron beam to locally fracture the separation membrane. This caused the two pre-loaded chemical reagents to mix in situ and the crystallisation process could be monitored from start to finish.

Lead author Dr Daniel Kelly explained: “One of the key features of our mixing cell design was the use of the electron beam to both image and puncture the cells. Unlike previous attempts, this made it possible for us to image the reaction from the first moment the solutions came into contact.”

The reaction timeline was captured using videos and advanced image processing technique to measure the evolution of the calcium carbonate species. The unique combination of high spatial resolution and control over the mixing time, as well as in situ elemental analysis, allowed the team to observe the transformation of liquid nanodroplets into amorphous precursors, and finally to crystalline particles. The results show the first visual confirmation of liquid-liquid phase separation, a theory that has been hotly debated amongst inorganic chemists over the past decade.

On the future direction for this new imaging platform, author Dr Nick Clark said: “So far we have focused primarily on characterising the formation of calcium carbonate, however we are optimistic that this type of experiment could be extended to study many other complex mixing reactions.”