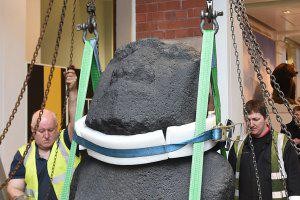 Moai Hava, on loan from the British Museum will be shown in a new exhibition, Making Monuments on Rapa Nui: The Stone Sculptures of Easter Island, opening on Wednesday, 1 April.

The monumental stone statues of Pacific island Rapa Nui (named Easter Island by European explorers) are some of the most widely recognised and fascinating archaeological objects in the world.

Following recent fieldwork on the island, Professor Colin Richards, an archaeologist at The University of Manchester, has developed this exhibition, which will take a fresh look at these impressive statues.

Moai Hava, meaning ‘dirty statue’ or ‘to be lost’ entered Manchester Museum in a five and a half hour operation. Cranes and other specialist lifting equipment were needed to get the statue, which stands 1.56 metres tall and weighs 3.3 tonnes, into the building.

It’s understood that the Moai were made on Rapa Nui between AD 1100 and 1600. The size and complexity of the moai increased over time and Moai Hava is one of only 14 moai made from basalt; the rest are carved from the island’s softer volcanic tuff.

Over a few hundred years the inhabitants of this remote island quarried, carved and erected around 887 moai.

The exhibition runs from Wednesday, 1 April to Sunday, 6 September, though Moai Hava will remain in the Museum entrance hall for a number of years.