Museum faces up to its slave trade past

Museum faces up to its slave trade past 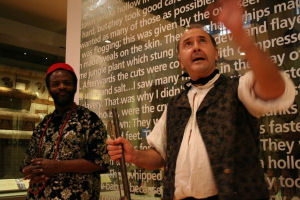 A 'promenade' play taking place at one of the country's best loved museums is to tackle the difficult issue of its own links with the slave trade.

The performance of ‘This Accursed Thing’ is a product of an Arts and Humanities Research Council funded project led by Tony Jackson, who is a Senior Lecturer in Drama at The University of Manchester.

Visitors to the Manchester Museum - which is part of the University - will spend an hour in the company of six characters connected with the slave trade - played by two actors.

They will move around the building with a museum curator, anti-slavery campaigner Thomas Clarkson, African and British slave traders, escaped slave James Watkins and a Lancashire cotton worker.

It was written by one of the actors, Andrew Ashmore, following his extensive research into the slave trade and Manchester Museum’s collection.

The performance will launch a conference examining the uses and impact of performance as a medium of learning in museums and at historic sites.

‘This Accursed Thing’ was developed in partnership with the Museum as part of its policy of exploring the hidden and sometimes contentious stories behind the collection with its visitors.

Tony Jackson said: "At first glance you might wonder why a performance about slavery is taking place alongside the famous archaeological, botanical and Egyptology exhibits - amongst others.

"One answer is that parts of the collection were paid for by wealthy individuals who benefited from the slave trade.

"This is a history behind a history: it's a chance for Manchester to acknowledge its slave trade links - but also to remember the proud contribution the city made to its abolition."

He added: "A highlight of the performance is when the audience meets an 1807 slave trader who challenges them to say what they think he' s doing is wrong.

"It can be quite dramatic and shocking.

"James Watkins was an escaped slave who went on a lecture tour in the UK in an effort to gather support for President Abraham Lincoln' s fight against slavery.

" It apparently worked: Lancashire cotton workers voted to boycott cotton from the Southern States - an amazingly compassionate act which threatened their own livelihoods.

"Lincoln himself sent the Lancashire workers a formal expression of gratitude."

Pete Brown, Head of Learning and Interpretation at The Manchester Museum,  said: "Visitors’ eyes light up when they realise the issues and debates being played out in front of them.

“Challenging the preconceptions about museums and their displays, this performance sends out a powerful message that live interpretation has a key part to play in presenting our own past”

The conference Performing Heritage : Research and Practice takes place from 3-5 April at The University of Manchester and brings together practitioners and researchers from across the world.

This Accursed Thing will also be available online as part of the Revealing Histories website in the near future.