Mussolini was no buffoon, historian argues 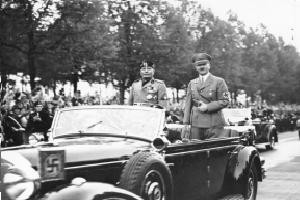 Benito Mussolini was not the bumbling buffoon portrayed in popular culture, but the most powerful force behind the rise of European Fascism before World War Two.

Using archival material kept across Europe, Dr Christian Goeschel, from The University of Manchester, says the Italian Fascist, as a senior partner to Hitler until the mid-1930s, was instrumental in the rise of the Nazi party in the pre-war years.

And many Italians, he says, are wrong to dismiss the world’s first Fascist dictator as an ineffectual madman.

According to the historian, Mussolini and the Fascists guided Hitler to power, offering him important strategic advice on, for example, enrolling the support of the middle classes.

The Beer Hall Putsch of 1923, a failed attempt by Hitler to seize power, was directly inspired by Mussolini’s earlier power grab in 1922.

Dr Goeschel said: “We and indeed many Italians tend to play down the role and importance of Mussolini and Fascist Italy, often seeing it as more benign than Hitler and the Nazis.

“But this is untrue: Mussolini was the world’s first Fascist dictator, heading an unpleasant regime which used poison gas in Abyssinia and sent oppositionists into repressive ‘confinement’.

“But the way we deal with our past has implications for modern politics: the Fascist salute can still be given in Italian football games with impunity; fans can throw bananas onto the pitch.

“Some contemporary Italian political parties have a lineage which can be traced directly to the Fascists.”

According to the historian, our less than critical view of Italian Fascism can be traced to a romanticised and condescending view of Italians going back to the eighteenth century.

But he also argues that Liberal elites in Italy, ever since 1943, have striven forcefully to disassociate their country from the alliance with Nazi Germany during the Second World War.

He added: “What is clear is that more work is still needed to understand why we have this view of Italian history, which is increasingly a minor subject in modern history.

“That is a mistake because in so many ways, Italy has proved to be the laboratory of modern politics and the most potent influence on European political culture.”

Read his blog, Mussolini and Hitler, in http://www.eutopiamagazine.eu/en/christian-goeschel