Mystery of unusual neutron star system revealed after 20 years, thanks to thousands of volunteers

After more than two decades, an international research team has identified a galactic mystery source of gamma rays: a heavy neutron star with a very low mass companion orbiting it.

Using novel data analysis methods running on about 10,000 graphics cards in the distributed citizen science project, Einstein@Home, the team identified the neutron star by its regularly pulsating gamma rays in a deep search of data from NASA's Fermi satellite. Surprisingly, the neutron star is completely invisible in radio waves. The binary system was characterised with an observing campaign across the electromagnetic spectrum, and breaks several records.

The neutron star also spins around its own axis at more than 30,000 rpm, making it one of the fastest rotating. At the same time, its magnetic field – usually extremely strong in neutron stars – is exceptionally weak.

Astronomical observations from 2014 made it possible to determine the properties of the binary star's orbits. “That a neutron star is behind the gamma-ray source known since 1999 was considered probable since 2009. In 2014 after observations of the system with optical and X-ray telescopes it became clear that this is a very tight binary system. But all searches for the neutron star in it have so far been in vain,” says co-author of the study, Dr Colin Clark of the Jodrell Bank Centre for Astrophysics at The University of Manchester.

To unambiguously prove the existence of a neutron star, not just its radio waves or gamma rays, but also their characteristic pulsations must be detected. The rotation of the neutron star causes this regular flashing, similar to the periodic twinkling of a distant lighthouse. The neutron star is then called a radio or gamma-ray pulsar, respectively.

“In binary systems like the one we have now discovered, pulsars are known as ‘black widows’ because, like spiders of the same name, they eat their partners, so to speak," explains Clark. “The pulsar vaporises its companion with its radiation and a particle wind, filling the star system with plasma that is impenetrable to radio waves.

"This was the first Spider pulsar to be made through the collaboration between Jodrell Bank and the Albert Einstein Institute, but there are several more candidate Spider binaries just like this one. Our group within Jodrell Bank is monitoring these closely with optical telescopes to pin down their orbital periods with the precision required for gamma-ray pulsation searches to conclusively identify them. We are hopeful that this is the first of many such discoveries."

In binary systems like the one we have now discovered, pulsars are known as ‘black widows’ because, like spiders of the same name, they eat their partners, so to speak," explains Clark. “The pulsar vaporises its companion with its radiation and a particle wind, filling the star system with plasma that is impenetrable to radio waves. 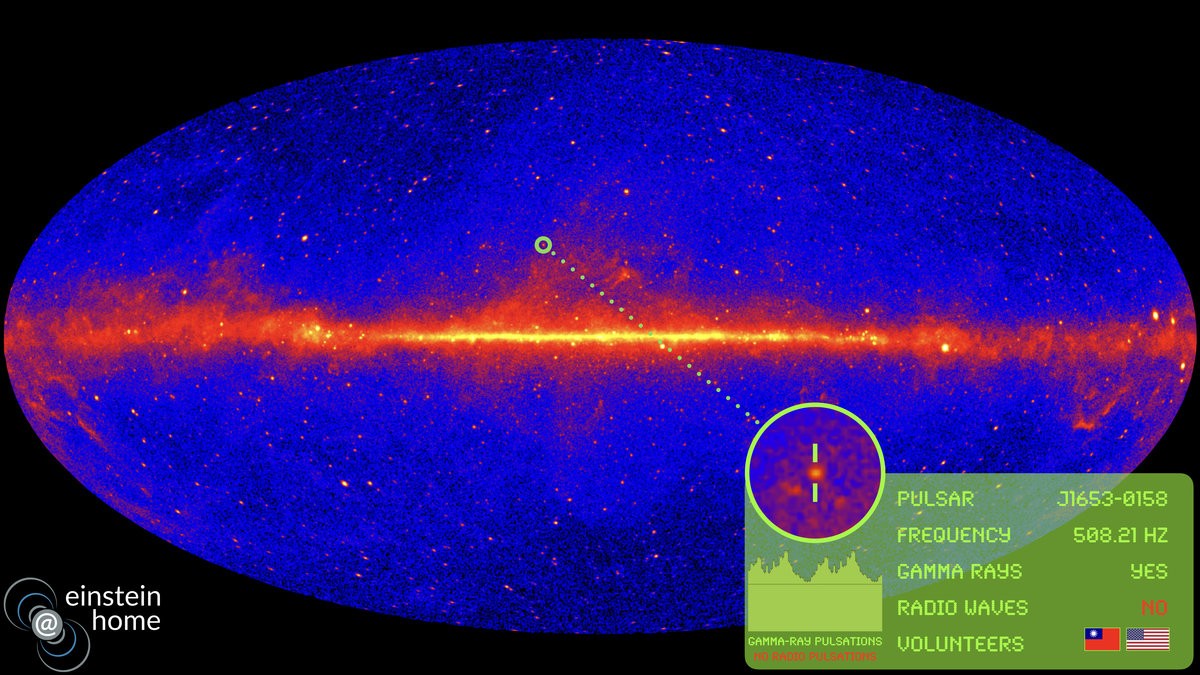 The new research published today in, Astrophysical Journal Letters, was made possible thanks to the computing power assistance of 10,000 volunteers. The international collaboration the enormous computing power of the citizen science project Einstein@Home as a novel data analysis method to track down the neutron star’s faint gamma-ray pulsations in data from NASA’s Fermi Space Telescope.

The volunteers donated idle compute cycles on the graphics cards (GPUs) of their computers to Einstein@Home. In less than two weeks, the team made a discovery that would have taken centuries of computing time on a conventional computer.

“The binary star system and the neutron star at its heart, now known as PSR J1653-0158, set new records,” explains Lars Nieder, PhD student at the Albert Einstein Institute (AEI), Hannover and first author of the study. “We have discovered the galactic dance of a super heavyweight with a flyweight. At slightly more than twice the mass of our Sun, the neutron star is extraordinarily heavy. Its companion has about six times the density of lead, but only about 1% the mass of our Sun. This ‘odd couple’ orbits every 75 minutes, more quickly than all known comparable binaries.”

After identifying the gamma-ray pulsar, the team searched for its radio waves. They found no trace, although they used the largest and most sensitive radio telescopes in the world, including Jodrell Bank’s Lovell Telescope. PSR J1653-0158 thus becomes the second rapidly rotating pulsar from which no radio waves are seen. There are two possible explanations: Either the pulsar sends no radio waves towards Earth, or, more likely, the plasma cloud envelops the binary star system so completely that no radio waves reach Earth.

In a further step, they searched data from the first and second observing runs of the Advanced LIGO detectors for possible gravitational waves that the neutron star would emit if it were slightly deformed. Again, the search was unsuccessful.

Mystery of unusual neutron star system revealed after 20 years, thanks to thousands of volunteers