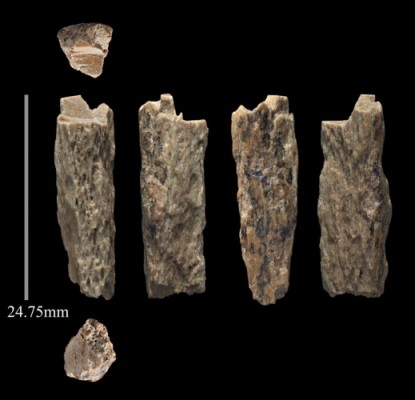 An international team of scientists has used a new molecular fingerprinting technique to identify one Neanderthal bone from around 2,000 tiny fragments found in Russia.

This is the first time that researchers have identified traces of an extinct human from an archaeological site using a collagen fingerprinting technique called ‘Zooarchaeology by Mass Spectrometry’ - or ZooMS - which was developed by Dr Michael Buckley from The University of Manchester. The research, published in the journal Scientific Reports, suggests that ZooMS has huge potential to increase our understanding of human evolution, including the amount of interbreeding that went on between our closely related cousins and modern humans.

The research team was made up of Dr Michael Buckley, Professor Thomas Higham and student Sam Brown of the University of Oxford, as well as other academics from the Max Planck Institute in Leipzig, Cranfield University and the Institute of Archaeology and Ethnography in Russia.

The sequences of collagen peptides in bone differ in tiny ways between different animal species. The team profiled these sequences at The University of Manchester using minute samples of over 2000 unidentified bone fragments from the site, before comparing these against a reference library of peptides from known animal species.

On finding out that one 2.5cm long piece of bone had a clear human fingerprint, Sam Brown said: “When the ZooMS results showed that there was a human fingerprint among the bones I was extremely excited. After a lot of hard work, finding this tiny bone which yields so much information about our human past was just fantastic. The bone itself is not exceptional in any way, and would otherwise be missed by anyone looking for possible human bones amongst the dozens of fragments that we have from the site.”

“This really was a case of looking for a needle in a haystack, but the collagen fingerprinting method is very robust and tiny amounts of material are all that are needed. New developments underway in my lab are further refining the technique and enabling a higher throughput of samples to be achieved. We are planning on widening the search for human remains from many other sites in the future.”

The bone was found in Denisova Cave in the Russian Altai region, a key site for archaeologists wanting to understand the nature of evolution over the last 100,000 years. Its cold climate means that bones from the cave are often exceptionally well-preserved in their DNA and collagen, which is ideal for genetics and radiocarbon dating.

However, there were periods during the Ice Age when the cave was occupied by carnivores such as hyenas and wolves, which crunched the bones into tiny pieces – hence why almost all of the excavated fragments were difficult to identify.