“In China's Wake is a bold and thorough piece of research in the tradition of ‘big picture’ global political economy. Steered by a theoretical framework, it weaves together China’s soaring demand for commodities; the boom in global markets for metals, fuels, and agricultural products; and development trajectories in resource-rich economies. The result is a fascinating contribution to development studies.” 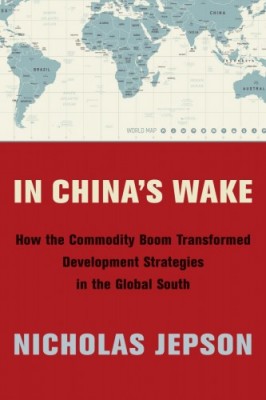 In the early 2000s, Chinese demand for imported commodities ballooned as the country continued its breakneck economic growth. Global markets in metals and fuels experienced a boom of unprecedented extent and duration. Meanwhile, resource-rich states in the Global South from Argentina to Angola began to advance a range of new development strategies, breaking away from the economic orthodoxies to which they had long appeared tied.

In China’s Wake reveals the surprising connections among these three phenomena. Nicholas Jepson shows how Chinese demand not only transformed commodity markets but also provided resource-rich states with the financial leeway to set their own policy agendas, insulated from the constraints and pressures of capital markets and multilateral creditors such as the International Monetary Fund.

His new book combines analysis of China-led structural change with fine-grained detail on how the boom played out across fifteen different resource-rich countries. Jepson identifies five types of response to boom conditions among resource exporters, each one corresponding to a particular pattern of domestic social and political dynamics. Three of these represent fundamental breaks with dominant liberal orthodoxy—and would have been infeasible without spiralling Chinese demand.

Jepson also examines the end of the boom and its consequences, as well as the possible implications of future China-driven upheavals. Combining a novel theoretical approach with detailed empirical analysis at national and global scales, In China’s Wake is an important contribution to global political economy and international development studies.

In China’s Wake is available in hardback, paperback and e-book. Columbia University Press is currently offering a 30% discount with the code CUP30, making the paperback or ebook £17.50.

Praise for 'In China’s Wake':

"The commodity boom driven by China’s demand has come and gone. Yet Nicholas Jepson shows that this boom transformed the developmental landscape of natural resource exporters forever. In China’s Wake is the most comprehensive account to date of the different responses to the boom across the global South and their consequences. It is an incisive introduction to the post-neoliberal, post-China world of development."

Ho-fung Hung, author of The China Boom: Why China Will Not Rule the World

"This is an excellent book about China’s rise and its major ramifications for developing countries. Focusing on the role of commodities exports, Jepson employs a thoughtful, carefully honed analytical approach. He further adds quantitative analyses and fieldwork interviews. This book makes an important contribution to development studies."

"Among the excellent books that explore the consequences of China’s externalization for the global South, In China’s Wake is perhaps the best. Theoretically robust and empirically rich, it engages with the implications of China-driven shifts in global market conditions for the development trajectories of fifteen countries across four world-regions. This is a path-breaking and stunningly original contribution that substantially advances our understanding of China’s relation to global transformation."

"While much of today’s China scholarship focuses on the negative impact of China’s growing technological and economic power on other countries, this important book looks at the other side of the argument: how China’s break with neoliberal orthodoxy benefited resource-rich countries, particularly during the boom period of commodity exports. This balanced account is a must-read for anyone interested in China’s global role in developing countries."