Enriqueta’s, the new cafe space at The John Rylands Library, is officially open. Serving coffee, tea and a selection of cakes, the cafe will be open seven days a week. But where did the cafe’s name come from? 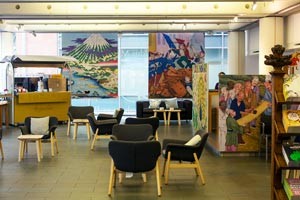 The John Rylands Library opened its doors to the public almost 120 years ago and while the Library’s name is familiar to most, not many know that the founder was actually John’s wife, Enriqueta Rylands. She created the Library in memory of her husband and gifted it to the city of Manchester; an act described at the time as the most significant single act of Library philanthropy the country had seen.

On the day the Library was inaugurated in October 1899, Enriqueta was awarded the Freedom of the City of Manchester, becoming the first woman to receive this honour. You will find a marble statue of her in the Historic Reading Room, but it does not bear her name. So, by naming the new cafe space after her, and featuring her in the Library’s Women Who Shaped Manchester exhibition, we’re putting a much deserved spotlight on a most remarkable and generous woman.