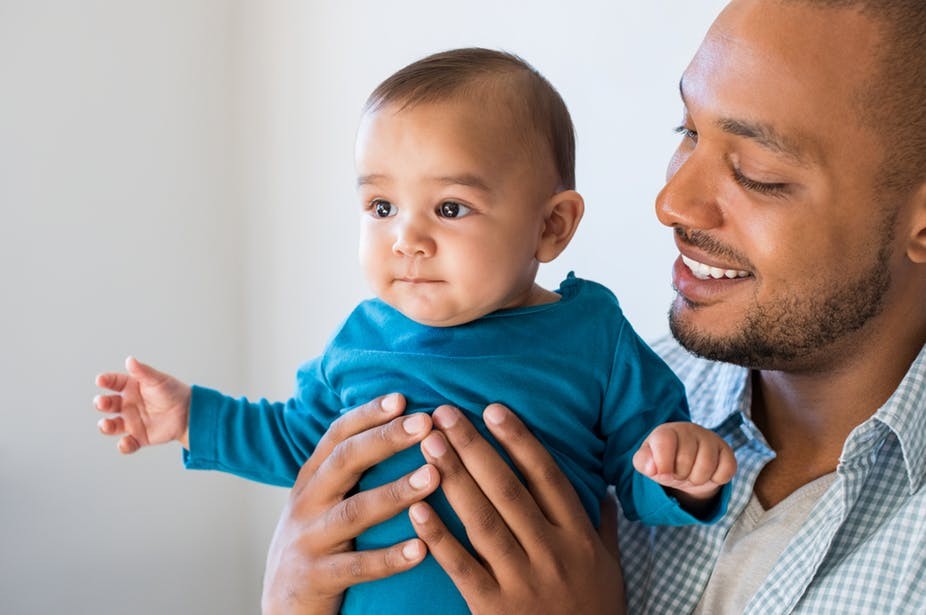 Despite widespread belief that men should be as involved as women in all aspects of childcare, they are both still largely playing traditional gender roles when looking after children, according to a new report from Business In The Community (BITC).

This is disappointing news for gender equality, and the British government’s initiatives around family-friendly workplace policies, such as shared parental leave.

The BITC report, entitled “Equal Lives”, is underpinned by a survey of 10,000 employees with caring responsibilities. It found that men under age 35 are “significantly more likely” to wish to take a more active role in caring for their children than previous generations of fathers. This finding resonates with the conversations we’ve had in our ongoing research with men and couples who opted to take shared parental leave. Since 2015, shared parental leave has allowed eligible parents the opportunity to divide up to a year of parental leave between them in a baby’s first year or first year of adoption.

Our interactions with this current generation of parents who’ve had a child since 2015 show just how strongly some hold ideals of parenting equality. For many, family-friendly schemes, such as shared parental leave, are playing catch up with their already-established ideals and beliefs: that parenting is a joint, and equal, venture. As one of the parents we interviewed, Sarada, told us:

I never saw the one-year maternity right as something that automatically applied to every single woman, I saw that as an option and shared parental leave caught up with my mindset.

Those we’ve interviewed have called into question traditional gender roles, with our research suggesting that shared parental leave policy is already lagging behind this new generation’s progressive thinking.

Parents have told us they find the maternity leave transfer model that underpins shared parental leave unhelpful. An employed woman still has the right to up to 52 weeks of maternity leave, but it’s up to her whether she wishes to swap some of this time for shared parental leave taken with her partner. It is one aspect of the scheme that has been blamed for its poor take up.

Equal Lives finds that many men consider that shared parental leave positions leave as “a woman’s prerogative”. The men in our own study felt they were “loaning” leave from their partner. They often described themselves as feeling like a “charity case”, or a “second-class parent”, beholden to their female partner to transfer some of “her” leave. The Equal Lives survey reported that 85% of parents under the age of 35 already consider caring to be an equal responsibility, so perhaps it’s unsurprising that the men we’ve spoken to were indignant about the way shared parental leave works.

Nordic countries are ahead of the game here, all adopting, in some form, a “use it or lose it” quota of leave specifically for dads, and offering a ring-fenced period of time on leave that is reserved for mothers and fathers. Both parents are obliged to take leave from work to care for their child and if they don’t use it, they lose it – a potential policy change which BITC supports.

Yet the UK’s established and comparatively long maternity leave (increased to one year in 2003) is deeply entrenched. And so it’s easy to see why the UK currently operates what is essentially a transferal scheme between parents.

In working through how couples make caring decisions, it’s useful to see how same-sex couples operate. The Equal Lives survey found that men in same-sex couples were less likely to be concerned with “depriving their partner” of leave that is rightfully theirs.

However, new Swedish research suggests that this is not the case in same-sex female couples involving a birth mother, where those preconceived roles can still linger. The research, comparing parental leave in different-sex and female same-sex couples, finds that the birth mother’s uptake of leave is higher than the partner’s uptake in both same-sex and different-sex couples. Perceived norms still exist, linked to the child’s “need” for its birth mother.

The Equal Lives findings come alongside other calls for the workplace to be reimagined. In early September, Frances O’Grady, the general secretary of the Trades Union Congress, called for a universal four-day week so that employees can benefit from the increased efficiency afforded by technological change.

Such a call also recognises that work needs to fit with peoples’ lives – and it provides food for thought about other ways to facilitate a more equal sharing of childcare. The Equal Lives report shows it’s time for employers and society to recognise more fully the importance of supporting employees to have lives outside work.