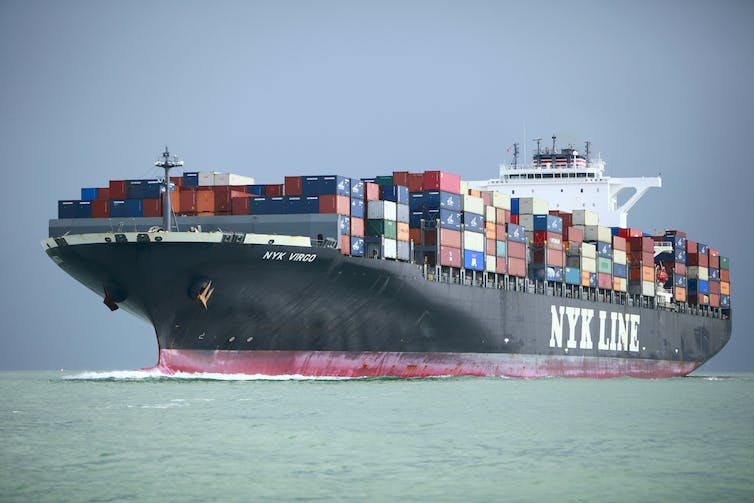 Six months on from the UN’s landmark 1.5°C report, which urged immediate global action to prevent global warming from rising beyond this dangerous level, the Committee on Climate Change (CCC) has advised the UK government to go zero-carbon by 2050. The committee’s report asserts that the target constitutes the country’s “highest possible ambition” and that it is not credible to aim for an earlier date.

We disagree. While the report does challenge the government to step up its climate ambition, our view is that creative carbon accounting and an unwillingness to prioritise the planet’s health over economic growth leaves the committee’s target lacking the urgency truly required to combat the climate emergency recently declared by even the government itself.

Before assessing whether 2050 is an appropriate date, its important to unpack exactly how the committee defines net zero. Based on international guidance from the UN’s Intergovernmental Panel on Climate Change, the UK’s target only includes territorial carbon emissions – those that are emitted directly within the country’s borders.

The committee’s report highlights that the country’s territorial carbon footprint has fallen by 30% from 2008. But as Swedish campaigner Greta Thunberg highlighted to parliament, using this figure as a mark of the country’s climate leadership amounts to nothing more than creative carbon accounting, glossing over the UK’s role in emissions that occur outside its borders.

The UK economy is primarily driven by its service sector, and the value of its imports is roughly triple that of its exports. The production and transport of these imported goods are a direct consequence of the UK’s consumption habits, but these emissions aren’t counted by the committee because they occur beyond its shores. Including these emissions and excluding emissions from exports to other countries, the UK’s carbon footprint is 70% higher than the figure used by the committee. 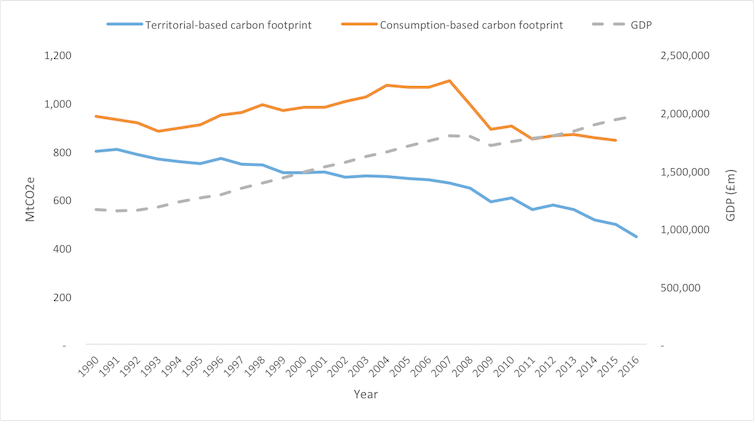 While territorial emissions have dropped, the UK’s consumption-based emissions are closely tied to economic growth.

Crucially, this alternative definition shows that emissions are still closely tied to the UK’s GDP, only notably reducing during the most recent financial crisis and remaining steady in recent years. The CCC does say that it will monitor the UK’s consumption-based emissions, and highlights that the country must avoid “offshoring” its territorial emissions by importing more goods. But it stops well short of addressing the fundamental elephant in the room – that to seriously tackle emissions, the UK must move away from an economy that prioritises short-term growth over radical emission reductions.

But it only recommends their inclusion in the UK’s carbon budget from 2033. This is 14 years too late. UK aviation emissions must not grow in the next decade if it is to prevent the worst effects of global warming. The time to act on aviation and shipping is now.

Even placing accounting issues aside, the 2050 target is unambitious and gives a false impression that there is time to play with. Lord Deben, chair of the committee, is almost certainly right that Extinction Rebellion’s demand that the country reaches net zero by 2025 is physically impossible. Shedding the country’s attachment to growth does not on its own lead to a neutral carbon ledger. The massive amounts of investment, innovation and infrastructure required to get there would not take full effect within six years.

But to say that anything earlier than a 2050 target isn’t credible is a grave and dangerous mistake. At current levels of emissions, the world will reach 1.5°C of warming in 12 years. Each year that the UK delays radical action, the necessary yearly emissions cuts to hit net zero become greater, making it ever harder to avoid catastrophic warming. Even with immediate action, the world is still pinning hopes on carbon capture and storage technologies that may never work at scale. Working towards an earlier target with steeper emissions cuts would require initial uncomfortable changes, but would massively lower our reliance on these incredibly uncertain technologies. 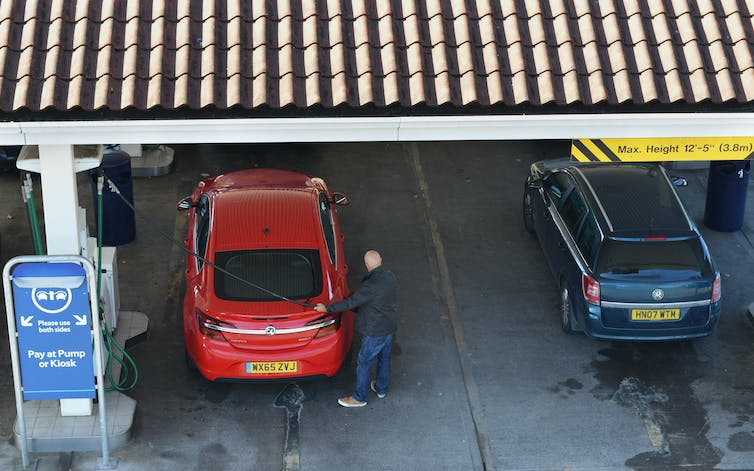 According to the committee, fossil fuel powered cars should be phased out sooner. 1000 Words/Shutterstock

The report’s claim that the 2050 target represents the UK’s “highest possible ambition” speaks more to the country’s economic priorities than to reality. Ten years ago, the committee wrote that an 80% reduction in emissions by 2050 (against 1990 levels) was at the limit of feasibility.

Now, the committee has changed its mind, stating that net zero can be achieved by the same date, for the same price: 1-2% of GDP. This small percentage is seen as the maximum acceptable cost of mitigating climate change, even in the face of the trillion-pound losses that are forecast if we do not take sufficient action. Is this really all the fate of present and future generations at risk of climate change is worth?

The report does hold some positives. It is unequivocal that current policy is insufficient to achieve even the UK’s existing targets and urges a ramping up in actionable efforts. It criticises plans to phase out fossil fuel powered cars by 2040 as too late and too vague, and calls for the government to confront failures to plant enough carbon-absorbing trees and decarbonise heating systems.

But in focusing on what is “feasible” rather than necessary, the committee’s trajectories simply do not reflect the radical carbon reductions the UK can make, and will only end the UK’s contribution to global warming on paper.

The year 2025 may be an unrealistic target, but missing that by a few years is much less dangerous than hitting a 2050 target comfortably. We need to take every leap we can and fast, even if it is into the dark. As Greta Thunberg says, if your house is on fire, you don’t tell people that the fire brigade will be along in a few hours – you act.

Click here to subscribe to our climate action newsletter. Climate change is inevitable. Our response to it isn’t.