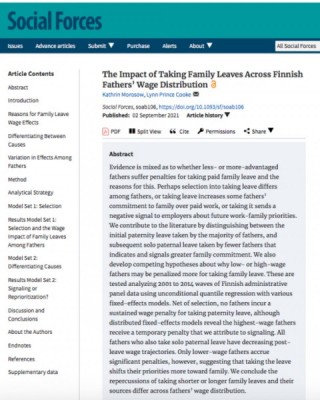 By distinguishing between the initial paternity leave taken by the majority of fathers, and subsequent solo paternal leave taken by fewer fathers, we have developed competing hypotheses about why low- or high-wage fathers may be penalised more for taking family leave.

These are tested by analysing 2001 to 2014 waves of Finnish administrative panel data. Net of selection, no fathers incur a sustained wage penalty for taking paternity leave, although distributed fixed-effects models reveal the highest-wage fathers receive a temporary penalty that we attribute to signalling.

All fathers who also take solo paternal leave have decreasing post-leave wage trajectories. Only lower-wage fathers accrue significant penalties, however, suggesting that taking the leave shifts their priorities more toward family. We conclude the repercussions of taking shorter or longer family leaves and their sources differ across fathers’ wage distribution.