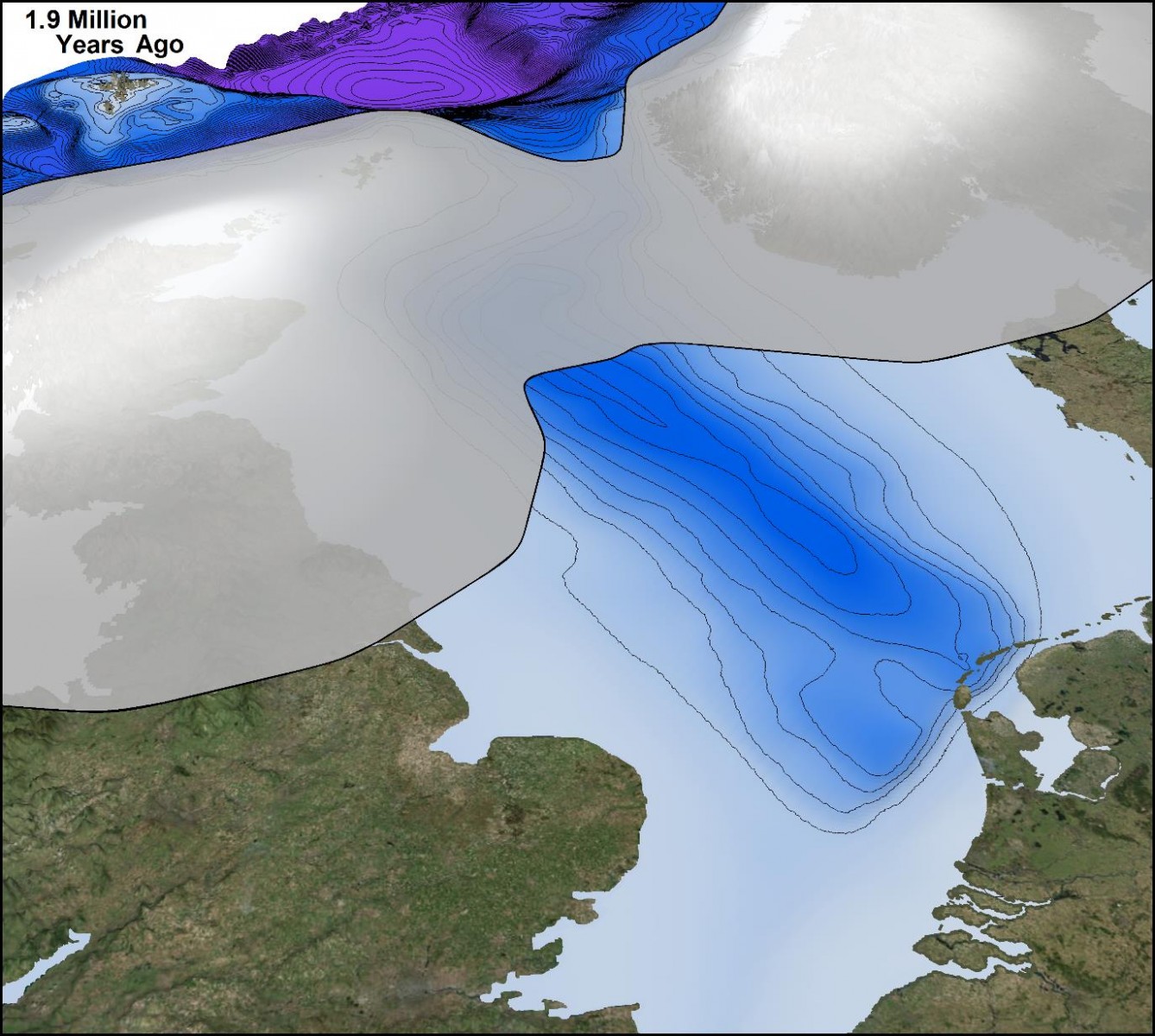 Breakthrough research has revealed the British Isles were repeatedly submerged under an ice sheet extending to the centre of the North Sea over a million years earlier than previously thought.

A team led by scientists from The University of Manchester and University of Aberdeen analysed sediment cores and seismic data from deep beneath the North Sea, and discovered that extensive ice sheets repeatedly covered much of the UK and Ireland from 2.5 million years ago.

At the same time, an even larger ice sheet covered much of Scandinavia. Back then the North Sea, was narrower and deeper than it is today, like a large ‘fjord’. Periodically, the ice sheets from the British Isles and Scandinavia advanced into water depths of around 250 m and generated icebergs nearly 300 m high.

By 1.9 million years ago the two ice sheets repeatedly merged in the centre of the North Sea, filling the ‘fjord’, as they advanced and retreated in response to climate changes controlled by the Earth’s orbit.

Up to now, the scientific consensus has been that glaciation on this scale first occurred in the North Sea about 1.1 million years ago.

However, the new research, which has been published in the journal Science Advances, shows it first happened 1.4 million years earlier. This marks a significant breakthrough in our understanding of the extent of past glaciation in North West Europe. 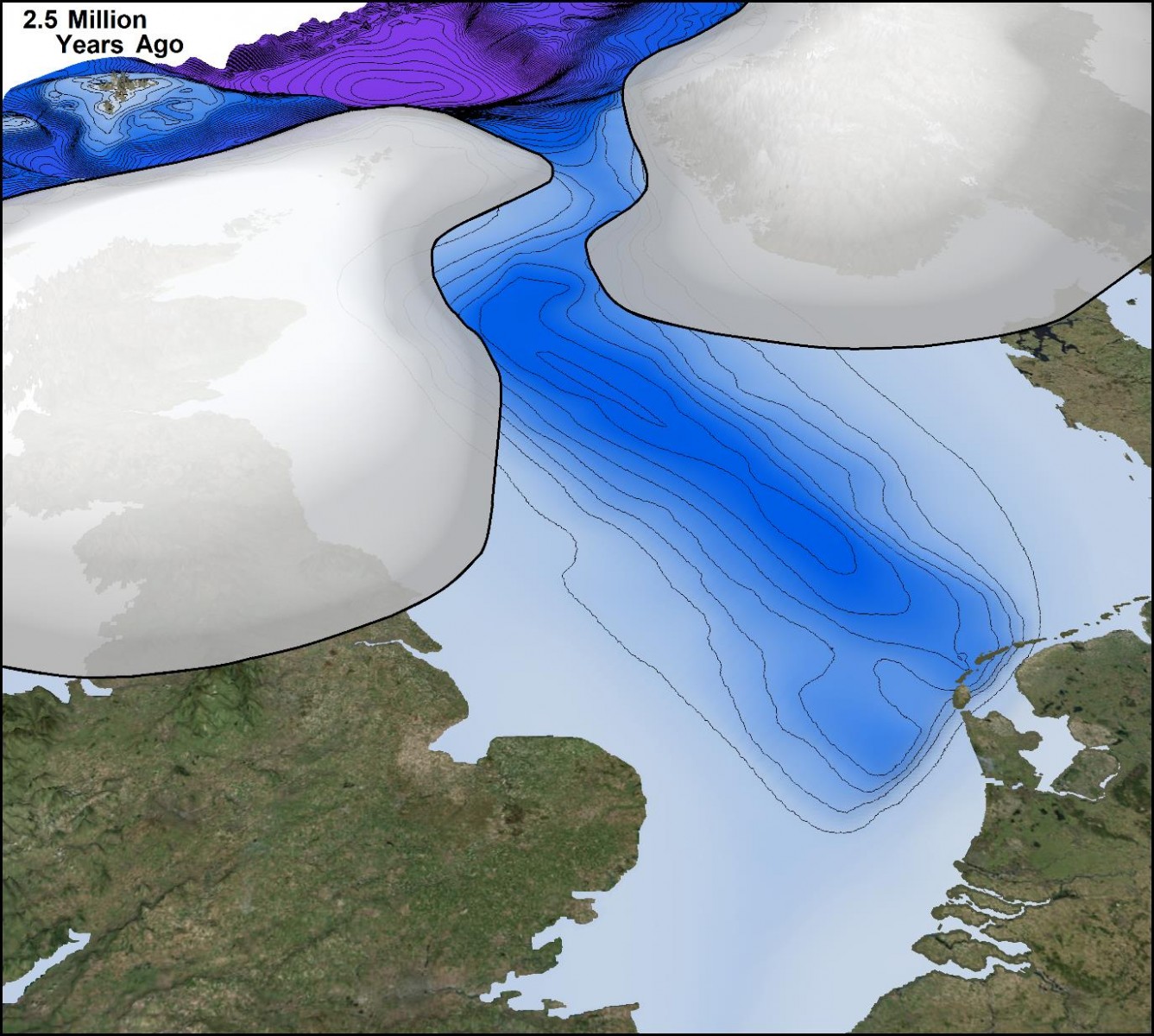 The North Sea basin has been subsiding for millions of years, continually preserving layer upon layer of evidence for past ice sheets, the evidence for which is not available onshore. Using geophysical data we then searched these different layers for traces of long-disappeared ice sheets.

The research required a multidisciplinary approach and Dr Rachel Harding, a researcher based at The University of Manchester, said: “The North Sea basin has been subsiding for millions of years, continually preserving layer upon layer of evidence for past ice sheets, the evidence for which is not available onshore. Using geophysical data we then searched these different layers for traces of long-disappeared ice sheets.”

Dr Andrew Newton, from Queen’s University Belfast and a visiting researcher at the University of Manchester, co-led the project with Dr Brice Rea from the University of Aberdeen. Dr Newton said: ”From these results we discovered that if you were to visit the North Sea 2.5 million years ago, Britain would have been under an ice sheet and you would have seen massive icebergs floating around the North Sea and as far south as the coast of the Netherlands.”

Professor Mads Huuse, also from the University's School of Earth and Environmental Science, continued: “This work has completely rewritten our understanding of the glacial history of the North Sea and shown that large ice sheets frequently covered the British Isles from 2.5 million years ago. Then, from about 1.9 million years ago, the British and Scandinavian ice sheets often merged together in the middle of the North Sea across different ice ages, encasing much of northwest Europe under a blanket of ice.”