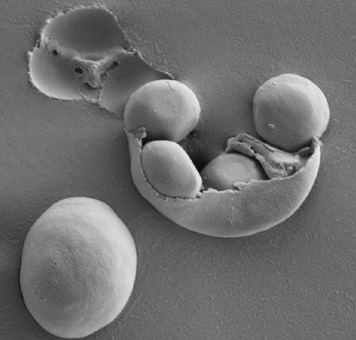 Researchers at the University of Manchester have discovered a new species of yeast that could help brewers create better lager.

Working in collaboration with the National Collection of Yeast Cultures (NCYC), the team say it is a new of  member of the Saccharomyces family and is closely related to the familiar brewers’ and bakers’ yeast.

However, this new species was found at altitude, growing more than 1000 metres above sea level on an oak tree in Saint Auban, in the foothills of the French Alps. To survive at this altitude, the yeast has developed an ability to tolerate colder conditions than most other known strains of Saccharomyces yeasts.

Professor Daniela Delneri, from the Manchester Institute of Biotechnology at The University of Manchester, said: “This ability is of interest to brewers, as lagers rely on yeasts that thrive in the cold; it also open the opportunity to create arrays of novel yeast hybrids with improved biotechnological traits.”

Yeasts also play a major role in many industrial biotechnology applications that rely on their fermentation, and a yeast that operates at lower temperatures opens up potential new applications in this field.

Dr Steve James from (NCYC), which is based on the Norwich Research Park, said: “This is the first new species belonging to the brewing yeast family to be discovered since 2011. It’s really exciting to find this new Saccharomyces yeast, as it extends even further the genetic diversity from which we can draw in the yeast gene pool.”

This ability is of interest to brewers, as lagers rely on yeasts that thrive in the cold; it also open the opportunity to create arrays of novel yeast hybrids with improved biotechnological traits.

As well as their familiar roles in brewing and baking, yeasts are one of the best model organisms scientists use to study how cells work. This has placed them at the forefront of synthetic biology, the emerging area of science that seeks to design biological systems useful purposes. Collections like that held by NCYC, with its over 4,000 different strains of yeast, are rich gene banks from which a myriad of different functions can be selected and engineered into new yeasts for specific purposes.

Despite there being many thousands of yeast strains catalogued in similar collections around the world, it’s estimated that we’ve only identified a small proportion, perhaps as little as 10%, of what exists in nature.

The search for more yeast diversity drove the team from the University of Manchester to search for new yeasts at higher altitudes, as the vast majority of known yeasts derive from lower areas. Dozens of different yeast samples were collected from oak trees, a particularly rich source of yeasts, and surrounding soils, and cold-tolerant strains were isolated based on their ability to grow at lower temperatures than most other yeasts. The Manchester scientists then teamed up with specialists in yeast taxonomy at the NCYC to sift through what they had found.

Most of the isolates were found to be known species, but two were confirmed through DNA sequencing and genetic testing to belong to an entirely new species.

Dr Samina Naseeb, a research associate from the University of Manchester added, “It was incredibly exciting when we realised that we discovered a new cold-tolerant species which can also ferment maltose efficiently.”