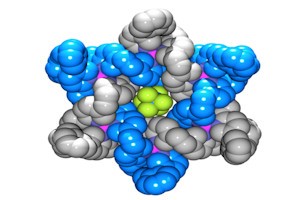 Scientists at The University of Manchester have generated a new star-shaped molecule made up of interlocking rings, which is the most complex of its kind ever created.

Known as a ‘Star of David’ molecule, scientists have been trying to create one for over a quarter of a century and the team’s findings are published at 1800 London time / 1300 US Eastern Time on 21 September 2014 in the journal Nature Chemistry.

Consisting of two molecular triangles, entwined about each other three times into a hexagram, the structure’s interlocked molecules are tiny – each triangle is 114 atoms in length around the perimeter. The molecular triangles are threaded around each other at the same time that the triangles are formed, by a process called ‘self-assembly’, similar to how the DNA double helix is formed in biology.
The molecule was created at The University of Manchester by PhD student Alex Stephens.
Professor David Leigh, in Manchester’s School of Chemistry, said: “It was a great day when Alex finally got it in the lab.  In nature, biology already uses molecular chainmail to make the tough, light shells of certain viruses and now we are on the path towards being able to reproduce its remarkable properties.
“It’s the next step on the road to man-made molecular chainmail, which could lead to the development of new materials which are light, flexible and very strong.  Just as chainmail was a breakthrough over heavy suits of armour in medieval times, this could be a big step towards materials created using nanotechnology. I hope this will lead to many exciting developments in the future.”
The team’s next step will be to make larger, more elaborate, interlocked structures.

The scientists’ work was funded by the Engineering and Physical Sciences Research Council (EPSRC).

Pictures and a video of the ‘Star of David’ molecule are available.
The paper 'A Star of David catenane' has been scheduled for Advance Online Publication (AOP) on Nature Chemistry's website at 1800 London time / 1300 US Eastern Time on 21 September 2014. To access the paper DOI for the above paper will be 10.1038/nchem.2056. Once the paper is published electronically, the DOI can be used to retrieve the abstract and full text from the Nature website by adding it to the following url: http://dx.doi.org/. Embargos for papers published in this way will lift at the time of electronic publication.
Media enquiries:
Katie Brewin or Aeron Haworth
Media Relations Office
The University of Manchester
Tel: 0161 275 8387
Email: aeron.haworth@manchester.ac.uk
Some modules are disabled because cookies are declined. Accept cookies to experience the full functionality of this page.
ACCEPT COOKIES
We use cookies to optimize the website, no personal information is stored. Learn more
DECLINE COOKIES ACCEPT COOKIES