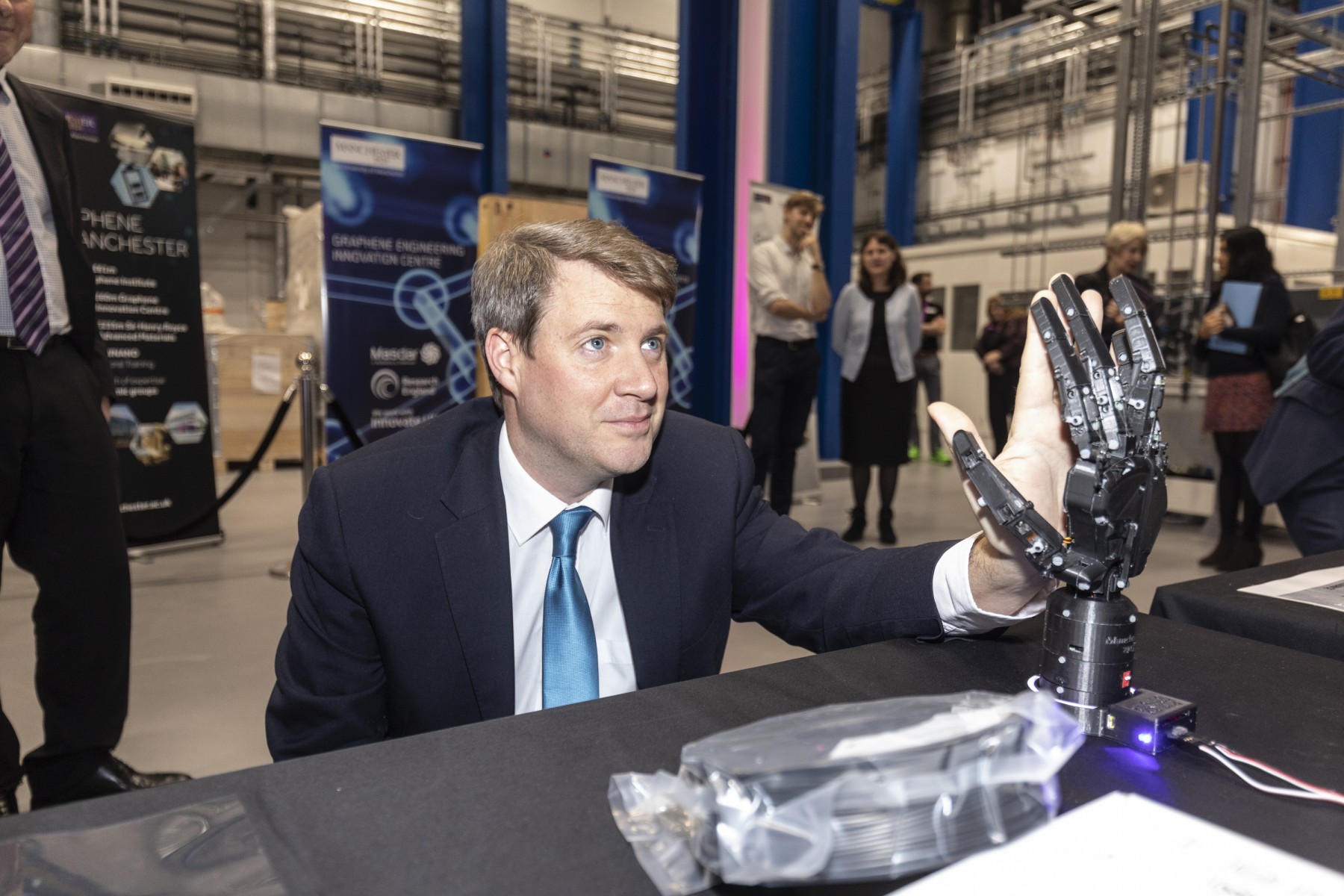 Nuclear robotics, artificial intelligence (AI) and the amazing potential of graphene were all on the agenda as the new Minister for Universities, Science, Research and Innovation, Chris Skidmore, came to The University of Manchester campus today (Friday 21st December).

The Minister, who was in the city visiting both its major higher education institutions, had a tour of the University’s newly opened Graphene Engineering and Innovation Centre (GEIC) as well as visiting the Robotics and Artificial Intelligence for Nuclear (RAIN) hub which is also led by, and based at, the University.

The GIEC, housed in the £65million Masdar Building, was itself only officially unveiled by His Royal Highness The Duke of York, last week.

During the tour, the Minister, who was accompanied by President and Vice-Chancellor, Professor Dame Nancy Rothwell, met with leading academics as well as the University’s graphene industry partners and entrepreneurs.

The delegation was then showed around the state-of-the-art facility by James Baker, CEO of Graphene@Manchester. He said: “It’s great to welcome the Minister to the Graphene Engineering Innovation Centre, a facility which will play a key role in developing advanced prototyping and manufacturing to translate great British innovation into the marketplace.”

The GEIC aims to accelerate the commercial impact of the so called ‘wonder material’, graphene, which was first isolated at Manchester in 2004. It will do this by working in collaboration with the National Graphene Institute, which is also based at the University. 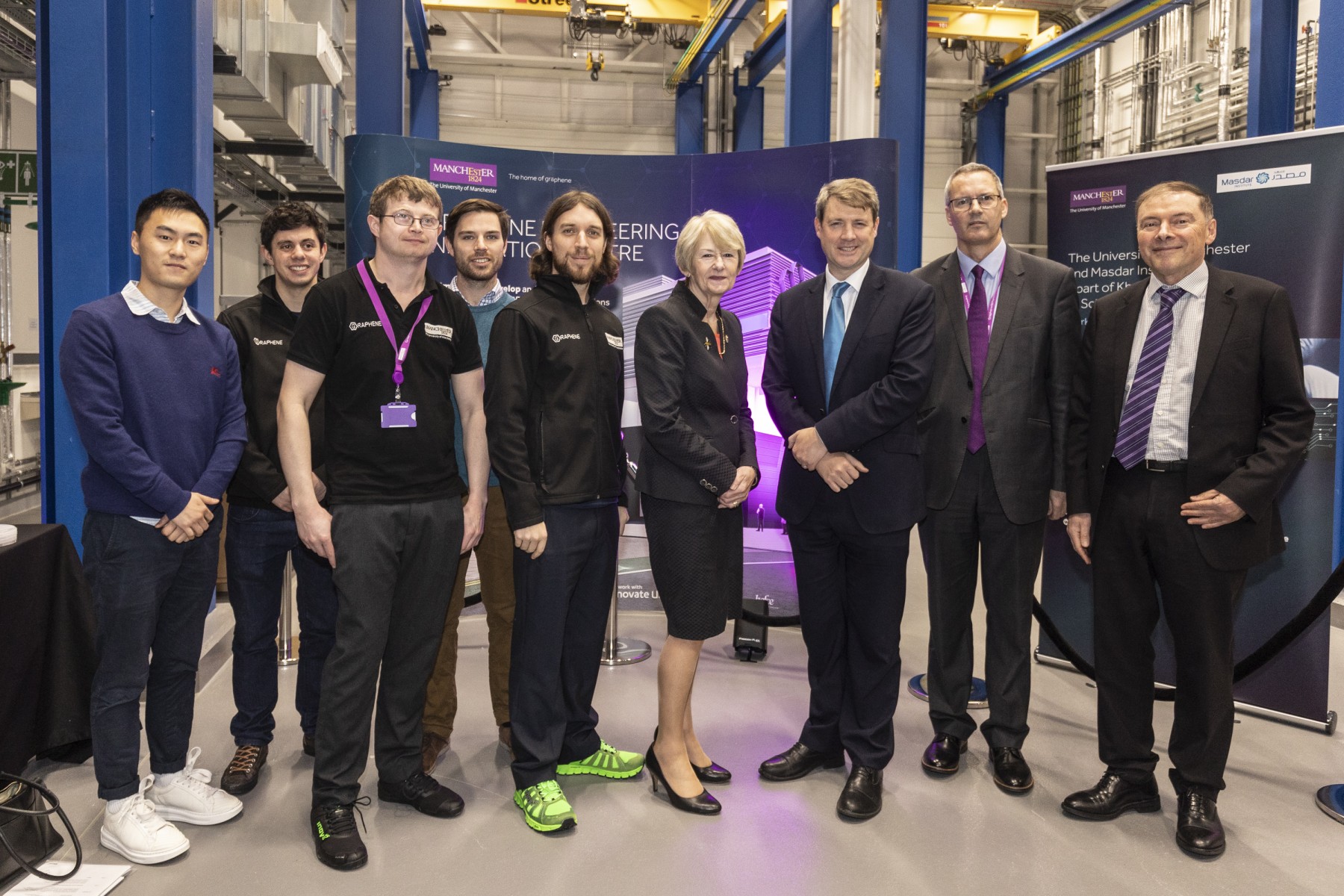 From the Graphene Engineering Innovation Centre to the RAIN Hub, Manchester is full of incredible talent and is at the forefront of developing the innovations of the future. Manchester’s universities play a key role in this by developing the skills of tomorrow.

Chris Skidmore, Minister of State for Universities, Science, Research and Innovation
„
Follow me on Twitter (opens in new window)

James added: “Manchester and the north is one of the most innovative regions in the UK, with a global reputation for leading scientific discovery. Graphene and 2D materials are just some of the more recent examples of ground-breaking science now being translated into commercial applications here.”

For the second part of his visit, the Minister headed to the RAIN project which uses robotic and AI technologies to solve challenges faced by the nuclear industry.

It is led by Barry Lennox, Professor of Applied Control in the School of Electrical and Electronic Engineering, he said: “Having the Minister come to Manchester, and see the revolutionary work we’re doing first hand, really is a testament to our team and the research we’re doing right here on campus.

“He was really engaged with the work we’re doing here which is great news, not just for our university and the RAIN hub, but the wider energy, robotics and AI research communities in general.”

The tour comes just over a year since the University’s Dalton Nuclear Institute was initially awarded £12 million to establish and lead the RAIN project.

Science and Innovation Minister Chris Skidmore said: “From the Graphene Engineering Innovation Centre to the RAIN Hub, Manchester is full of incredible talent and is at the forefront of developing the innovations of the future. Manchester’s universities play a key role in this by developing the skills of tomorrow.

“We want to boost high skilled jobs across the country which is why through the modern Industrial Strategy, we are giving research and development the biggest boost in UK history.”