Nice genes! What makes you genetically compatible with your partner?

Nice genes! What makes you genetically compatible with your partner? 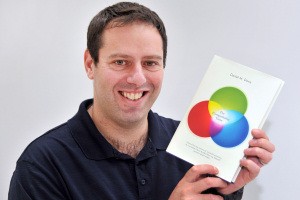 A University of Manchester professor and his wife have had their own DNA analysed for compatibility as part of the research for a new book out this week (August 29).

Professor Daniel Davis and his wife Katie’s experience is documented in The Compatibility Gene, published by Penguin, which discusses how our crucial compatibility genes may influence finding a life partner as well as our health and individuality.

Professor Davis said: “We each possess a similar set of around 25,000 human genes. Some of our genes vary from person to person, like those that give us a particular eye or hair colour. But my book is about the few genes – our compatibility genes – that vary the most between each of us. First and foremost these are immune system genes; they control how we combat disease. But recent research shows that they may be even more important than we once thought – there is evidence that they can influence how our brains are wired, how attractive we are, even how likely we are to reproduce.’’

“I’m used to writing academic papers looking at particular cells and genes but I had to write this book to highlight the wonder of this new research – take stock of the big picture - and make this fascinating new science accessible to everyone.”

The book explains how research has radically transformed knowledge of the way our bodies work - with profound consequences for medical research and ethics. The story begins with a small band of scientific pioneers who, during the Second World War, struggled to understand the mysteries of transplants and grafts. And continues to the Swiss zoologist who had people rank the sexiness of smells from worn T-shirts - and found the results related to our compatibility genes. Very recent experiments discussed in the book show that these same genes may also influence the likelihood of problems in pregnancy.

Professor Davis, Director of Research at the University of Manchester's Collaborative Centre for Inflammation Research, said finding out more about his and his wife’s genetic make-up had been a surprisingly nerve-wracking experience. The couple had their saliva sent to the Anthony Nolan Trust – a UK charity that helps match transplantation donors and recipients.

“The tubes were bar- coded and shuffled down a series of robotic instruments that first isolated the DNA and then made copies of our compatibility genes,” Professor Davis said. “Small beads, each having a different short piece of DNA attached, were added to a solution containing our genes. Beads with DNA just right to bind to one of our compatibility genes are picked out by a sensor, revealing which versions of these genes we have.”

Professor Davis discovered his compatibility genes were quite rare, while his wife’s were more common. One group of his genes were frequently found in Europe, particularly Eastern Europe, while the other set were common in India or Australia. His wife found she had a gene which would be helpful if she ever suffered an infection with HIV but which also increased her susceptibility to the auto-immune disease ankylosing spondylitis.

He said: “It’s not that any of my individual genes are unusual, but the combination of them is rare because they are usually found in different parts of the world. After being pleased that my genes were quite rare - which according to those smelly T-shirt experiments would mean lots of women would like my scent - I then realised this might not be so useful if I ever needed a transplant. In fact the advice they gave me was: Just don’t get ill!”

So does the book reveal the perfect set of genes? Professor Davis concludes: “Overall, nobody has a better or worse set of compatibility genes: there’s no hierarchy in the system. The fact that we differ is what’s important; the way our species has evolved to survive disease requires us to be different.”

For further information or to request an interview with Professor Daniel Davis, please contact Alison Barbuti | Media Relations Officer | The University of Manchester

Professor Davis is available over the Bank holiday weekend.

Professor Davis is director of research at the University of Manchester's Collaborative Centre for Inflammation Research and a visiting professor at Imperial College, London. He has published over 100 academic papers, including papers in Nature and Science, and Scientific American, and lectures all over the world, including at the Royal Institution. He has previously won the Oxford University Press Science Writing Prize.

For further information about the book in the UK, please contact: Thi Dinh 020 7010 3156 / thi.dinh@uk.penguingroup.com