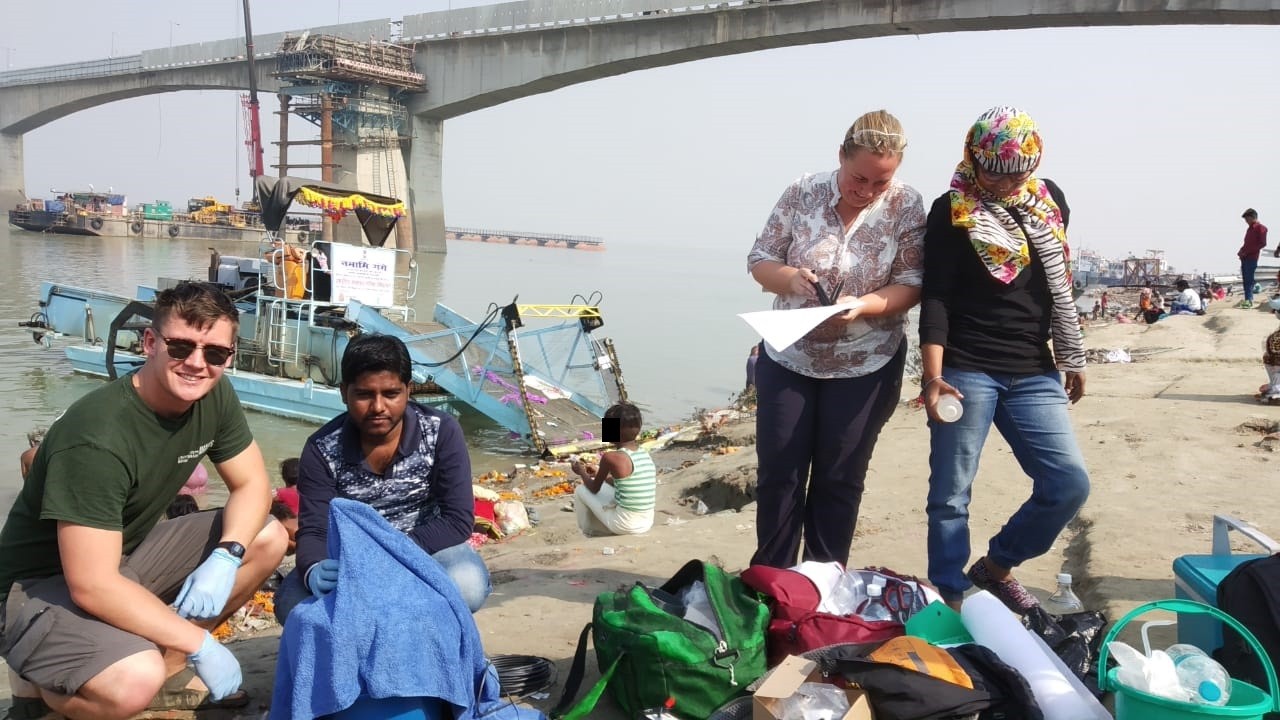 Water quality in rivers is affected by underpinning ‘natural’ hydrogeological and biogeochemical processes, as well as interactions between people and their environment that are accelerating stress on water resources at unprecedented rates.

Pollutants can move at different speeds and accumulate in varying quantities along rivers where the mix of the complex ‘cocktail’ of chemicals that is making its way towards the ocean is constantly changing, a new study reveals.

Researchers have discovered characteristic breakpoints – often found when a tributary joins the main river or significant point sources exist – can change the behaviour of some compounds, causing the concentration of these chemicals to change drastically, depending on where they are on their journey down the river.

Experts discovered the phenomenon after piloting a new, systematic approach to understanding hydrogeochemical dynamics in large river systems along the entire length of India’s River Ganges (Ganga) – from close to its source in the Himalayas down to the Indian Ocean.

This new research approach proven successful at the iconic Ganga can be applied to other large river systems across the world – hopefully shedding new light on how to tackle the global challenge of aquatic pollution by multiple interacting contaminants.

Publishing its findings in Water Research, the international research team, which includes experts from the Universities of Birmingham and Manchester and other Indian and UK collaborators, reveals that chemicals including nitrate, chloride, sulfate, calcium, sodium and strontium are cut and boosted in different proportion by a series of breakpoints along the Ganga.

They found that mixing, dilution and weathering are key processes controlling major hydrochemistry - identifying four major breakpoints which alter the concentration of at least four chemicals in the river. Five minor breakpoints affect the water mix of 2-3 chemicals, with two ‘single’ locations impacting on just one parameter.

Dr Laura Richards, the study’s lead author from The University of Manchester, commented: “Our research helps to understand the downstream transitions in the chemistry of the River Ganga providing important baseline information and quantification of solute sources and controls.  In addition to improving the understanding of a river system as environmentally and societally important as the Ganga, the systematic approach used may also be applicable to other large river systems.”

Our research helps to understand the downstream transitions in the chemistry of the River Ganga providing important baseline information and quantification of solute sources and controls.  In addition to improving the understanding of a river system as environmentally and societally important as the Ganga, the systematic approach used may also be applicable to other large river systems.

Stefan Krause, Professor of Ecohydrology and Biogeochemistry at the University of Birmingham, commented: “Large river systems, such as the Ganga, provide crucial water resources with important implications for global water, food and energy security. Understanding the complex dynamics of such systems remains a major challenge.

“The breakpoints we have identified in India change the behaviour of some compounds, altering the composition of the cocktail of chemicals flowing down the Ganga to the ocean.

“Breakpoint analysis could be a game changer in understanding how pollutants travel along major watercourses – allowing us to identify the ‘hotspots’ which will shed new light on the behaviour of aquatic pollution and how better to tackle this global challenge.”

Informed by a 2019 post-monsoonal survey of 81 bank-side sampling locations, researchers identified five major hydrogeochemical zones - characterised, in part, by the inputs of key tributaries, urban and agricultural areas, and estuarine inputs near the Bay of Bengal.

The researcher’s novel research approach brings systematic insight into the factors controlling key geochemistry in the Ganga - one of the world’s largest and most important river systems, flowing over 2,500 km from the Himalayas to the Bay of Bengal, through one of the world’s most densely populated areas.

As a major source of livelihood, the river is a key water source to more than 400 Million people and very important to many social and religious traditions in India, but faces increasing environmental challenges associated with rapid development, climate change, increasing urbanisation, water demand and agricultural intensity.