On the hunt for the next Alan Turing
Newsroom

On the hunt for the next Alan Turing 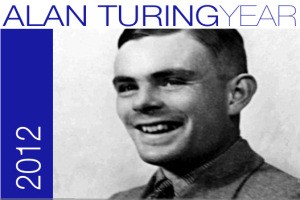 The search for the next Alan Turing begins this New Year with a fiendish code-breaking competition for school children.

The School of Mathematics at The University of Manchester, where Turing helped develop the earliest stored-program computers following his pioneering code-breaking work at Bletchley Park during WW2, is organising the competition to celebrate his centenary.

The Alan Turing Centenary Cryptography Competition, sponsored by leading travel search site Skyscanner, is open to schoolchildren all over the country in years 7-11. Already more than 70 teams from schools across the Northwest have signed up.

To crack the competition, which runs from today [January 9th] to April 16th, entrants must follow the story of Mike and Ellie – two children who get caught up in the search for the missing ‘Turing Treasure’ – solving a series of cryptographic challenges as they go.

Dr Charles Walkden, one of the organisers of the competition at the University, said: “You don't need to be an expert mathematician or a computer programming whizz to take part, you just need to be good at problem solving and thinking logically.

“It is a great opportunity for children to solve mathematical puzzles in a fun way.”

Students should organise themselves into teams of a maximum of four people.  Teams should register on the competition website http://www.maths.manchester.ac.uk/cryptography_competition_2012

The prizes have been sponsored by leading travel search site, Skyscanner whose founders, Gareth Williams and Bonamy Grimes, are graduates of The University of Manchester. The prizes are:

There will be a prize-giving ceremony on Tuesday 12th June 2012 at The University of Manchester, prior to the public lecture on Alan Turing by Dr Andrew Hodges.

The competition is part of the 2012 Alan Turing Year, celebrating the life and career of Alan Turing (http://www.mathcomp.leeds.ac.uk/turing2012).  This includes the Turing 100 international conference hosted by The University of Manchester. For more details visit http://www.turing100.manchester.ac.uk

Move each letter along by 13 places in the alphabet, so A becomes M, B becomes N, etc.

Dr Walkden is available for interview.

Skyscanner is Europe’s leading travel search site providing instant online comparisons for millions of flights on over a thousand airlines, as well as car hire and hotels.

Skyscanner was founded in 2003 by Manchester University graduates, Gareth Williams and Bonamy Grimes along with fellow IT professional Barry Smith. Skyscanner’s head office is based in Edinburgh with a second office in Singapore.

The site is available in 29 languages and is offered as a mobile site as well an app for Android, iPhone and iPad, which have received over 5 million downloads. Having seen an average annual growth of 94% over the last three years, Skyscanner was ranked in the top 20 in Sunday Times Microsoft Tech Track 100 (2011).

The company is focusing on rapid expansion in existing and new markets with the objective of becoming number one in the world.