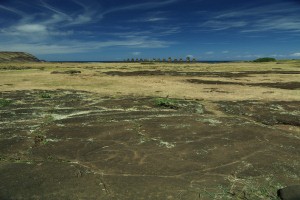 An archaeologist studying a remote Pacific island, world famous for its strange stone statues, says outsiders - and not its ancestors - should be blamed for its historic demise hundreds of years ago.

Dr Karina Croucher from The University of Manchester says her research backs a growing body of opinion which casts new light on the people living on the island of Rapa Nui, named ‘Easter Island’ by its discoverers in 1722.

“Easter Islanders’ ancestors have been unfairly accused by Westerners of being primitive and warlike, for toppling statues - or moai - and for over-exploiting the island’s natural resources,” she said.

But the art which adorns Easter Island’s landscape, volcanoes and statues, body tattoos and carved wooden figurines, when examined together, show a different picture of what the islanders were like, according to Dr Croucher.

“The carved designs - including birds, sea creatures, canoes and human figures - mimic natural features already visible in the landscape and show their complex relationship to the natural environment,” she said.

“They were a people who saw themselves as connected to the landscape, which they carved and marked as they did their own bodies and the moai statues.

“These people must have had a sophisticated and successful culture – until the Westerners arrived - and it is time we recognise that.

“Early expedition accounts repeatedly show the islanders produced a trading surplus – they were successful and self sufficient.

“It must have been quite a place to live: I imagine the sounds of the carvers dominating the soundscape as they worked on the rock.”

Dr Croucher, whose research is funded by the British Academy, added: “There is a growing body of opinion which says history has been unkind to the Easter Islanders - and my research confirms and underlines that.

“Rather than a story of self-inflicted deprivation, I agree with the view that substantial blame has to rest with Western contact, ever since Easter Island’s first sighting by Jacob Roggeveen in 1722.

“Visitors brought disease, pests and slavery, resulting in the tragic demise of the local population and culture.

“There is little archaeological evidence to support the history of internal warfare and collapse before contact with the outside world.”

Easter Island’s 19th Century history is a sad one: slave raids in 1862 reduced the Island’s population  A few islanders survived slavery and were returned home, bringing with them small pox and other diseases.

The missionaries converted the remaining population to Christianity, encouraging them to abandon their traditional beliefs.

Even then, several hundred inhabitants were driven off the island to work on sugar plantations in Tahiti. By 1877, a population of just 110 people was recorded.

The academic, based at The School of Arts, Histories and Cultures, said: “Explorer Thor Heyerdahl famously  asserted that it was South Americans who built the moai.

“However, rather than relying on the arrival of a South American fleet of carvers and sculptors, it is clear the moai, rock art and tattooing are very much part of the same tradition, which has Polynesian roots.

“The statues and rock art, although difficult to date with certainty, are the result of a population which flourished on the island until outside contact set the tragic course for the Island’s demise.”