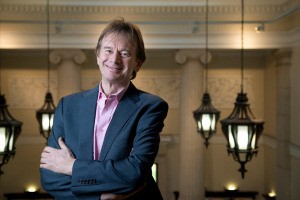 One of the country’s best loved historians is to become Professor of Public History at The University of Manchester in September.

Michael Wood, who has been a regular face on our TV screens  for over three decades, will teach undergraduate and postgraduate students, lead historical field trips and give four public lectures a year.

Originally from Moss Side Manchester, Michael has made well over a hundred documentary films and is known for his work with community historians across the UK. He is also  the author of numerous best-selling history books and will be based at the University for three years.

Over the next two years or so he will be writing and  presenting a major BBC series exploring the history of China, a country with which the university has strong and growing ties . Michael has also recently made the highly praised  BBC TV series ‘The Story of  India’.

Other documentary highlights include  In Search of the Trojan War, Art of the Western World, Shakespeare, The Story of England, and the Great British Story.

His ‘In the Footsteps of Alexander the Great’ was chosen recently by Bettany Hughes in her Weldon Lecture as the standout presenter-led history series of the last fifty years.  The Independent  called his  recent Story of England ‘the most innovative history series ever on TV’.

Michael’s documentaries are seen across the world: he  is well known on Public Television in the United States, where the Wall Street Journal recently called his work ‘still the gold standard’..

The enthusiastic public response to his recent  ‘Great British Story’  inspired  a major Heritage Lottery Fund programme “All Our Stories’  to help people across the UK explore their community’s heritage. With Michael as its spokesperson, this programme continues as ‘Sharing Heritage’.

Michael’s appointment follows the announcement of Education Secretary Michael Gove's plans to reform the history curriculum in schools, plans which  are  currently causing an intense debate in the press.

As a long time practitioner of public history, Michael  has concerns that the plans could make it more difficult for schoolchildren and their teachers to link what they learn in school to contemporary issues at home and abroad.

He said : “I am thrilled to be involved in such an exciting project in History and the Humanities, in such a dynamic and forward-looking university, and especially in my home town Manchester, one of the world’s great historic cities.

Fellow historian, Vice-President and Dean of the Faculty of Humanities, Professor Keith Brown said: “Michael Wood is the UK's leading public historian. He has had a huge popular impact, and we are delighted to announce his appointment. Because he is also widely respected as a serious scholar, we think our students will benefit greatly from his talents. But he’ll also bring to us his expertise in making history accessible to the public- which is what his role is all about.”