Fake news. Fractured politics. A state against its people. Discover the story of the Peterloo Massacre in The John Rylands Library’s latest exhibition. 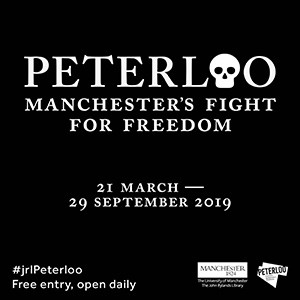 We’re proud to formally announce the next exhibition at The John Rylands Library: Peterloo. It will run from Thursday, 21 March until Sunday, 29 September and as always, is free and open daily.

Those of you who subscribe to The John Rylands Library eNewsletter or read the Special Collections blog will have seen the build up to the exhibition, which marks the 200th anniversary of this tragic and poignant event.

On 16 August 1819, people flooded into the heart of Manchester to demand political representation. Fearing revolution, the state crushed the peaceful protest without mercy. Peterloo tells the story of Manchester’s fight for freedom, as the city marks two centuries since one of the darkest moments in its history. 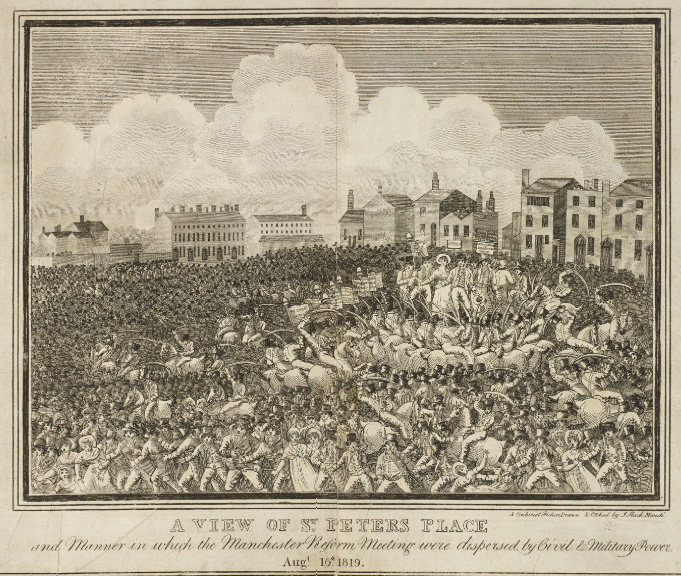 When crowds gathered at St Peter’s Field to attend a radical political meeting no one expected the bloody massacre that followed. The Library’s exhibition features fascinating items that bring both sides of a volatile debate to life – from the people who were brutally cut down by armed soldiers, to the magistrates who spread lies to cover up the horror.

Uncover the personal stories behind the protest that shocked Britain. Explore original handwritten records to learn the names of the ordinary Mancunians who sacrificed their lives for liberty. See the documents that show how the city authorities tried to conceal the atrocities they committed against their own citizens. Get up close to historic newspapers, and be inspired by the journalists who tirelessly sought to report truth, expose corruption and seek justice.

The Peterloo Massacre was a crucial step on Britain’s long journey to democracy. In today’s climate of heated political debate, viral media and clashing opinions, the story of these Manchester radicals resonates more than ever before. Come and consider: how different is Britain 200 years later?

Visit The John Rylands Library section of the website to find out more: